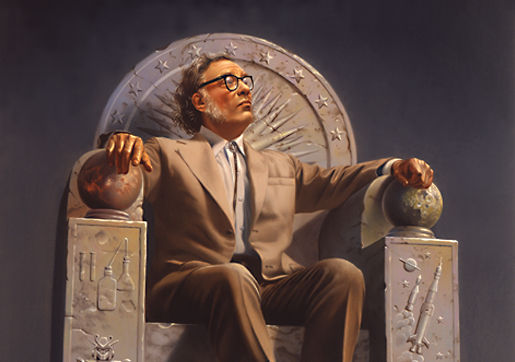 Isaac Asimov’s readers have long found something prophetic in his work, but where did Asimov himself look when he wanted to catch a glimpse of the future? In 1964 he found one at the New York World’s Fair, the vast exhibition dedicated to “Man’s Achievement on a Shrinking Globe in an Expanding Universe” that history now remembers as the most elaborate expression of the industrial and technological optimism of Space Age America. Despite the fanciful nature of some of the products on display, visitors first saw things there — computers, for instance — that would become essential in a matter of decades.

“What is to come, through the fair’s eyes at least, is wonderful,” Asimov writes in a piece on his experience at the fair for the New York Times. But it all makes him wonder: “What will life be like, say, in 2014 A.D., 50 years from now? What will the World’s Fair of 2014 be like?” His speculations begin with the notion that “men will continue to withdraw from nature in order to create an environment that will suit them better,” which they certainly have, though not so much through the use of “electroluminescent panels” that will make “ceilings and walls will glow softly, and in a variety of colors that will change at the touch of a push button.” Still, all the other screens near-constantly in use seem to provide all the glow we need for the moment.

“Gadgetry will continue to relieve mankind of tedious jobs,” Asimov predicts, and so it has, though our kitchens have yet to evolve to the point of preparing “‘automeals,’ heating water and converting it to coffee; toasting bread; frying, poaching or scrambling eggs, grilling bacon, and so on.” He hits closer to the mark when declaring that “robots will neither be common nor very good in 2014, but they will be in existence.” He notes that IBM’s exhibit at the World’s Fair had nothing about robots to show, but plenty about computers, “which are shown in all their amazing complexity, notably in the task of translating Russian into English. If machines are that smart today, what may not be in the works 50 years hence? It will be such computers, much miniaturized, that will serve as the ‘brains’ of robots.”

“The appliances of 2014 will have no electric cords,” Asimov writes, and in the case of our all-important mobile phones, that has turned out to be at least half-true. But we still lack the “long-lived batteries running on radioisotopes” produced by “fission-power plants which, by 2014, will be supplying well over half the power needs of humanity.” The real decade of the 2010s turned out to be more attached to the old ways, not least by cords and cables, than Asimov imagined. Even the United States of America hasn’t quite mastered the art of designing highways so that “long buses move on special central lanes” along them, let alone forms of ground travel that “take to the air a foot or two off the ground.”

But one advance in transportation Asimov describes will sound familiar to those of us living in the 2010s: “Much effort will be put into the designing of vehicles with ‘Robot-brains,’ vehicles that can be set for particular destinations and that will then proceed there without interference by the slow reflexes of a human driver.” Indeed, we hear about few reportedly imminent technologies these days as much as we hear about self-driving cars and their potential to get us where we’re going while we do other things, such as engage in communications that “will become sight-sound and you will see as well as hear the person you telephone,” on a screen used “not only to see the people you call but also for studying documents and photographs and reading passages from books.”

Conversations with the moon colonies, Asimov needlessly warns us, “will be a trifle uncomfortable” because of the 2.5-second delay. But immediately thereafter comes the much more realistic prediction that “as for television, wall screens will have replaced the ordinary set.” Still, “all is not rosy” in the world of 2014, whose population will have swelled to 6,500,000,000 — or 7,298,453,033, as it happened. This has many implications for development, housing, and even agriculture, though the “mock-turkey” and “pseudosteak” eaten today has more to do with lifestyle than necessity. (“It won’t be bad at all,” Asimov adds, “if you can dig up those premium prices.”)

Finally, and perhaps most importantly, “the world of A.D. 2014 will have few routine jobs that cannot be done better by some machine than by any human being. Mankind will therefore have become largely a race of machine tenders.” Asimov foresees the need for a change in education to accommodate that, one hinted at even in General Electric’s exhibit in 1964, which “consists of a school of the future in which such present realities as closed-circuit TV and programmed tapes aid the teaching process.” His envisioned high-school curriculum would have students master “the fundamentals of computer technology” and get them “trained to perfection in the use of the computer language.”

But even with all these developments, “mankind will suffer badly from the disease of boredom, a disease spreading more widely each year and growing in intensity.” The “serious mental, emotional and sociological consequences” of that will make psychiatry an important medical specialty, and “the lucky few who can be involved in creative work of any sort will be the true elite of mankind, for they alone will do more than serve a machine.” Though Asimov may have been surprised by what we’ve come up with in the quarter-century since his death, as well as what we haven’t come up with, he would surely have understood the sorts of anxieties that now beset us in the future-turned-present in which we live. But even given all the ways in which his predictions in 1964 have proven more or less correct, he did miss one big thing: there was no World’s Fair in 2014.

Isaac Asimov Laments the “Cult of Ignorance” in the United States: A Short, Scathing Essay from 1980