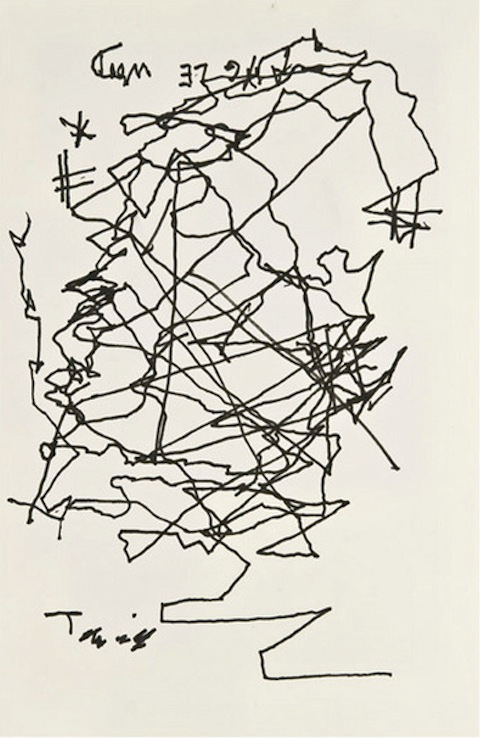 Jorge Luis Borges (1899-1986), one of the great writers to come out of Argentina, went blind when he was  only 55 years old. As unsettling as it must have been, it wasn’t particularly a surprise. He once told The New York Times, “I knew I would go blind, because my father, my paternal grandmother, my great-grandfather, they had all gone blind.”

In the years following that life-changing moment, Borges never learned braille and could no longer read. But he did continue to write; he served as the director of Argentina’s National Library; he traveled and delivered an important series of lectures at Harvard on poetry (click to listen); and he even took a stab at drawing — something he did fairly well earlier in life. (See our previous post: Two Drawings by Jorge Luis Borges Illustrate the Author’s Obsessions.)

Above, you can see a self portrait that Borges drew in the basement of the famous Strand Bookstore in New York City. According to the Times, he did this “using one finger to guide the pen he was holding with his other hand.” After making the sketch, Borges entered the main part of the bookstore and started “listening to the room, the stacks, the books,” and made the remarkable observation “You have as many books as we have in our national library.”

If you’ve ever been to The Strand, you know how many books it holds. Indeed, the store boasts of being “New York City’s legendary home of 18 Miles of new, used and rare books.” My guess is that Argentina’s national library might have a few more volumes than that. But who is really counting?

Note: An earlier version of this post appeared on our site in March 2014.