No first trip to Mexico City is complete without a visit to the Frida Kahlo Museum. Located in the village-turned-borough of Coyoacán south of the city’s center, it requires a short trip-within-a-trip to get there. But even for travelers who know nothing of Kahlo’s art, it’s worth the effort — especially since they’ll come away knowing quite a bit about not just Kahlo’s art and life but the culturally rich place and time she inhabited. For the building occupied by the Frida Kahlo Museum was, in fact, the home in which the artist was born and spent most of her life, making her one of Coyoacán’s many notable residents. (Others include writer Octavio Paz, iconic comic actor Mario “Cantinflas” Moreno, and actress-singer Dolores del Río.)

Though I’ve long wanted to return to the Blue House, as the Frida Kahlo Museum is colloquially known, I somehow haven’t made it back again on any of my subsequent trips to Mexico City. And given the state of world travel at the moment, I doubt I’ll get the chance to make another visit any time soon.

Fortunately, the Museum has become virtually explorable online, with 360-degree views of all its rooms as well as its grounds. Even virtually, writes Vogue‘s Manon Garrigues, “Frida’s spirit can be felt everywhere. In her atelier are carefully arranged pigments facing her easel, while in the kitchen, which once welcomed the couple’s friends to the house, including their renowned neighbor, Trotsky, who lived next door with his wife, are playful ceramics.”

For those with compatible headsets, all of this is also viewable in WebVR mode —  even Kahlo’s bedroom, where “an urn in the form of her face lies on her bed, holding her ashes. Beside is the mirror in which Frida, bedridden, observed herself to paint her famous self-portraits, such as The Two Fridas and Frida y la cesarea, now on display in the villa.” 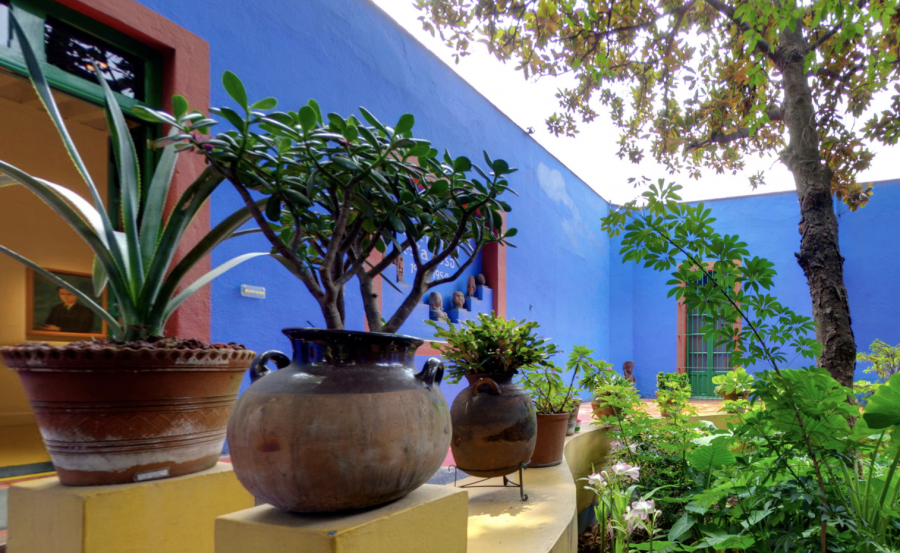 The home-turned-museum’s ten rooms display a great deal of Kahlo’s art, of course, but also works by her husband, the painter Diego Rivera, as well as the couple’s clothing and personal effects. You’ll find paintings by other artists of Kahlo’s day like Paul Klee and José María Velasco, and also handcrafted items from other regions of Mexico. The only thing missing in the virtual Frida Kahlo Museum experience is the requisite cafe de olla enjoyed afterward, back out on the streets of Coyoacán. Enter the virtual tour here.