BirdCast: You Can Now Forecast the Migration of Birds Across the U.S. Just Like the Weather 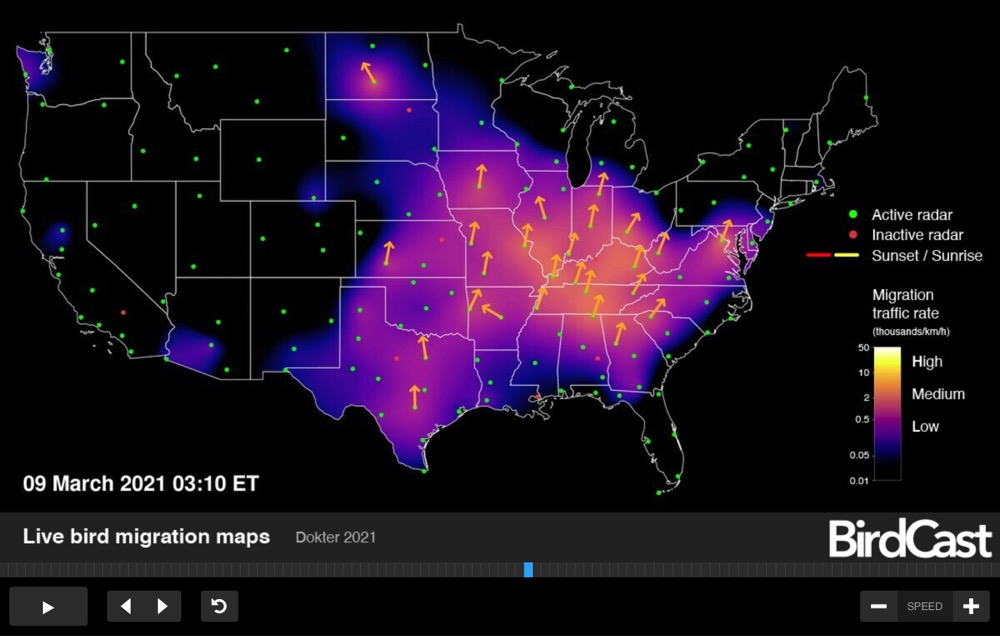 Developed by Colorado State University and the Cornell Lab of Ornithology, BirdCast offers both live bird migration maps and bird forecast migration maps for the United States. “These forecasts come from models trained on the last 23 years of bird movements in the atmosphere as detected by the US NEXRAD weather surveillance radar network,” says BirdCast’s web site.

Unprecedented in both the kind of information they provide and the detail in which they provide it, “these bird migration maps represented the culmination of a 20-year long vision, so too the beginnings of new inspiration for the next generation of bird migration research, outreach and education, and application.”

You can learn more about the development and workings of BirdCast in the recorded webinar below, featuring research associate Adriaan Dokter and Julia Wang, leader of the Lights Out project, which aims to get Americans spending more time in just such a state. “Every spring and fall, billions of birds migrate through the US, mostly under the cover of darkness,” says its section of BirdCast’s site. “This mass movement of birds must contend with a dramatically increasing but still largely unrecognized threat: light pollution.” The goal is “turning off unnecessary lighting during critical migration periods,” and with spring having begun last weekend, we now find ourselves in just such a period. Luckily, our fine feathered friends shouldn’t be disturbed by the glow of the BirdCast map on your screen. View live BirdCast maps here.

Watch “The “Art of Flying,” a Short Film Capturing the Wondrous Murmurations of the Common Starling