Most of us know Rembrandt’s masterpiece by the name The Night Watch, but it has a longer original title: Militia Company of District II under the Command of Captain Frans Banninck Cocq. By the same token, the version of the painting we’ve all seen — whatever we happen to call it — is smaller than the one Rembrandt originally painted in 1642. “In 1715, the monumental canvas was cut down on all four sides to fit onto a wall between two doors in Amsterdam’s Town Hall,” writes The New York Times‘ Nina Siegal. “The snipped pieces were lost. Since the 19th century, the trimmed painting has been housed in the Rijksmuseum, where it is displayed as the museum’s centerpiece, at the focal point of its Gallery of Honor.”

In recent years, the Rijksmuseum has honored The Night Watch further with a thoroughgoing restoration called Operation Night Watch. This ambitious undertaking has so far produced attractions like the largest and most detailed photograph of the painting ever taken, zoom-in-able to the individual brushstroke.

That phase required high imaging technology, to be sure, but it may appear downright conventional compared to the just-unveiled recreation of the work’s three-centuries-missing pieces, which will hang on all four sides of the original at the Rijksmuseum for the next three months. This making-whole wouldn’t have been possible without a small copy made in the 17th century — or the latest artificial-intelligence technology of the 21st. 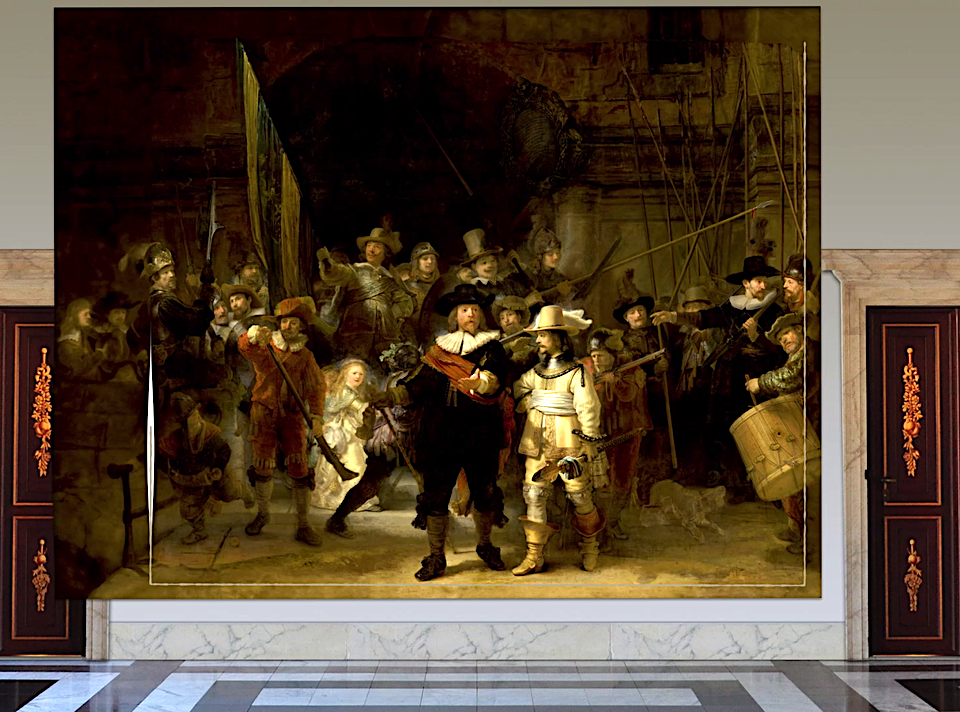 Image courtesy of the Rijksmuseum

“Rather than hiring a painter to reconstruct the missing pieces, the museum’s senior scientist, Robert Erdmann, trained a computer to recreate them pixel by pixel in Rembrandt’s style,” writes Siegal. Erdmann used “a relatively new technology known as convolutional neural networks, a class of artificial-intelligence algorithms designed to help computers make sense of images.” The process, explained in more detail by Shanti Escalante-De Mattei at ARTNews, involved digitally “splitting up the painting into thousands of tiles and placing matching tiles from both the original and the copy side-by-side,” training multiple neural networks to complete the painting in a style as close as possible to Rembrandt’s rather than the copyist’s. The result, with a few new faces as well as a startlingly different compositional feel than the Night Watch we’ve all seen, would no doubt please Captain Banninck Cocq and his militiamen: this, after all, is the portrait they paid for.

You can watch videos on this Rijksmuseum page showing how the classic painting was restored.

The Restoration of Rembrandt’s The Night Watch Begins: Watch the Painstaking Process On-Site and Online