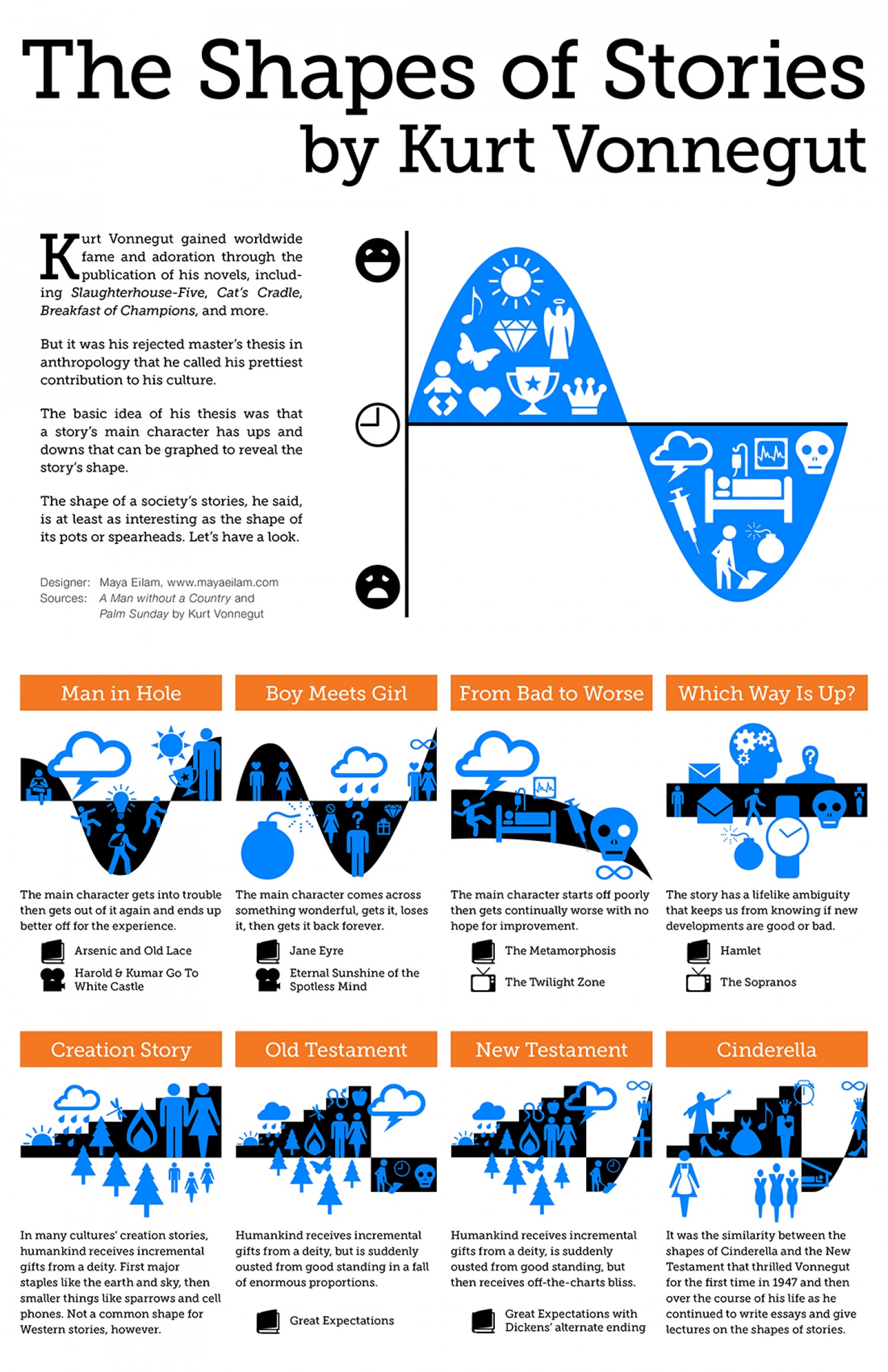 “What has been my prettiest contribution to the culture?” asked Kurt Vonnegut in his autobiography Palm Sunday. His answer? His master’s thesis in anthropology for the University of Chicago, “which was rejected because it was so simple and looked like too much fun.” The elegant simplicity and playfulness of Vonnegut’s idea is exactly its enduring appeal. The idea is so simple, in fact, that Vonnegut sums the whole thing up in one elegant sentence: “The fundamental idea is that stories have shapes which can be drawn on graph paper, and that the shape of a given society’s stories is at least as interesting as the shape of its pots or spearheads.” In 2011, we featured the video below of Vonnegut explaining his theory, “The Shapes of Stories." We can add to the dry wit of his lesson the picto-infographic by graphic designer Maya Eilam above, which strikingly illustrates, with examples, the various story shapes Vonnegut described in his thesis. (Read a condensed version here.)

The presenter who introduces Vonnegut's short lecture tells us that “his singular view of the world applies not just to his stories and characters but to some of his theories as well.” This I would affirm. When it comes to puzzling out the import of a story I’ve just read, the last person I usually turn to is the author. But when it comes to what fiction is and does in general, I want to hear it from writers of fiction. Some of the most enduring literary figures are expert writers on writing. Vonnegut, a master communicator, ranks very highly among them. Does it do him a disservice to condense his ideas into what look like high-res, low-readability workplace safety graphics? On the contrary, I think.

Though the design may be a little slick for Vonnegut's unapologetically industrial approach, he'd have appreciated the slightly corny, slightly macabre boilerplate iconography. His work turns a suspicious eye on overcomplicated posturing and champions unsentimental, Midwestern directness. Vonnegut’s short, trade publication essay, “How to Write With Style,” is as succinct and practical a statement on the subject in existence. One will encounter no more a ruthlessly efficient list than his “Eight Rules for Writing Fiction.” But it’s in his “Shapes of Stories” theory that I find the most insight into what fiction does, in brilliantly simple and funny ways that anyone can appreciate.

The Shape of A Story: Writing Tips from Kurt Vonnegut