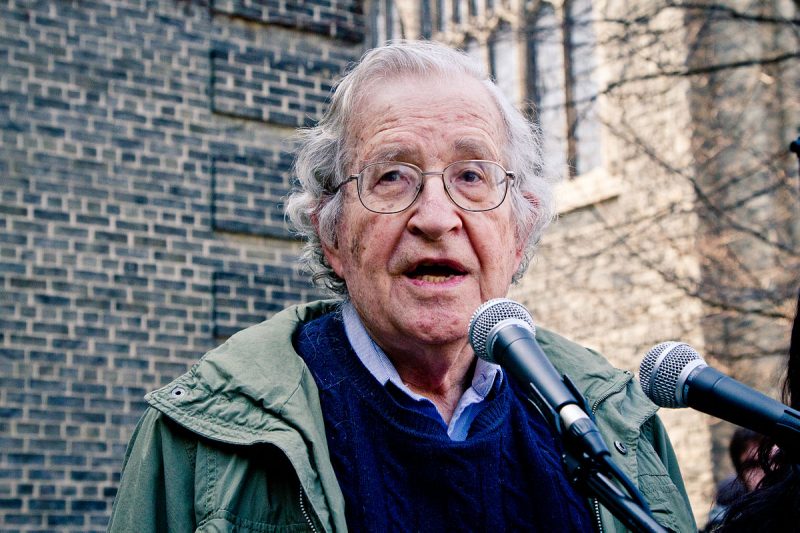 The gross and ever-increasing degree of economic inequality in the United States has become a phenomenon that even the country’s elites can no longer ignore since the explosive publication of Thomas Piketty’s Capital in the 21st Century. The book’s highly technical marshaling of data speaks primarily to economists and secondarily to liberal policymakers. Piketty's calls for redistribution have lead to charges of “Marxism” from the other end of the political spectrum—due to some inevitable degree to the book's provocative title. Yet in the reckoning of actual Marxist Slavoj Žižek, the French economist is still “a good Keynsian” who believes that “capitalism is ultimately the only game in town.”  While the Marxist left may critique Piketty’s policy recommendations for their reliance on state capitalism, another fierce leftist thinker---Žižek’s sometime intellectual rival Noam Chomsky---might critique them for their acquiescence to state power.

Chomsky’s role as a public intellectual has placed him at the forefront of the left-anarchist fight against neoliberal political economy and the U.S. foreign and domestic policies that drive it. Whether those policies come from nominally liberal or conservative administrations, Chomsky asserts time and again that they ultimately serve the needs of elites at the expense of masses of people at home and abroad who pay the very dear cost of perpetual wars over resources and markets. In his 2013 book On Anarchism, Chomsky leaves little room for equivocation in his assessment of the role elites play in maintaining a state apparatus that suppresses popular movements:

If it is plausible that ideology will in general serve as a mask for self-interest, then it is a natural presumption that intellectuals, in interpreting history or formulating policy, will tend to adopt an elitist position, condemning popular movements and mass participation in decision making, and emphasizing rather the necessity for supervision by those who possess the knowledge and understanding that is required (so they claim) to manage society and control social change.

This excerpt is but one minute example of Chomsky's fiercely independent stance against abuse of power in all its forms and his tireless advocacy for popular social movements. As Henry Giroux writes in a recent assessment of Chomsky’s voluminous body of work, what his many diverse books share is “a luminous theoretical, political, and forensic analysis of the functioning of the current global power structure, new and old modes of oppressive authority, and the ways in which neoliberal economic and social policies have produced more savage forms of global domination and corporate sovereignty.” And while he can sound like a doomsayer, Chomsky's work also offers “the possibility of political and economic alternatives” and “a fresh language for a collective sense of agency and resistance.”

Today we offer a collection of Chomsky’s political books and interviews free to read online, courtesy of Znet. While these texts come from the 1990s, it’s surprising how fresh and relevant they still sound today. Chomsky’s granular parsing of economic, social, and military operations explains the engineering of the economic situation Piketty details, one ever more characterized by the title of a Chomsky interview, “The Prosperous Few and the Restless Many.” See links to nine books below. To read, click on links to either the “Content Overview” or “Table of Contents.” The books can also be found in our collection, 800 Free eBooks for iPad, Kindle & Other Devices.

Necessary Illusions: Thought Control in Democratic Societies (1989): Based on the Massey Lectures, delivered in Canada in November 1988, Necessary Illusions argues that, far from performing a watchdog role, the "free press" serves the needs of those in power.

Deterring Democracy (1991): Chomsky details the major shift in global politics that has left the United States unchallenged as the preeminent military power even as its economic might has declined drastically in the face of competition from Germany and Japan. Deterring Democracy points to the potentially catastrophic consequences of this new imbalance, and reveals a world in which the United States exploits its advantage ruthlessly to enforce its national interests -- from Nicaragua to the Philippines, Panama to the Middle East.

Year 501: The Conquest Continues (1993): Analyzing Haiti, Latin America, Cuba, Indonesia, and even pockets of the Third World developing in the United States, Noam Chomsky draws parallels between the genocide of colonial times and the murder and exploitation associated with modern-day imperialism.

What Uncle Sam Really Wants (1993): A brilliant distillation of the real motivations behind U.S. foreign policy, compiled from talks and interviews completed between 1986 and 1991, with particular attention to Central America. [Note: If you have problems accessing this text, you can read it via this PDF.]

The Prosperous Few and the Restless Many (1994): A fascinating state-of-the-world report from the man the New York Times called "arguably the most important intellectual alive."

Secrets, Lies and Democracy (1994): An interview with David Barsamian

Keeping the Rabble in Line (1994): Interviews with David Barsamian

Excerpts from Powers and Prospects: Reflections on Human Nature and the Social Order (1996): A scathing critique of orthodox views and government policy. See full text in pdf form here.

And for exponentially more Chomsky, see Chomsky.info, which hosts well over a hundred of his topical articles from the Vietnam era to the present.