In a 2012 interview with National Public Radio, cartoonist Ralph Steadman, best known for his collaborations with Gonzo journalist Hunter S. Thompson, lamented the quality of the candidates in that year’s Presidential race:

The problem is there are no Nixons around at the moment. That’s what we need — we need a real good Nixon to give something for other people to get their teeth into, to really ... loathe him, to become themselves more effective as opposition leaders.

Alas, his prayers have been answered.

Steadman, who has brought his inky sensibilities to bear on such works as Animal Farm and Alice in Wonderland, has a new American president to add to the collection he discussed several years ago, in the video above.

Steadman’s pen was the sword that rendered Gerald Ford as a scarecrow, Ronald Reagan as a vampire, and George W. Bush as a monkey in a cage of his own making.

Barack Obama, one of the candidates in that comparatively bland 2012 election, is depicted as a tenacious, slender vine, straining ever upward.

Jimmy Carter, somewhat less benignly, is a puppy eagerly fetching a stick with which to pardon Nixon, the Welsh cartoonist’s dark muse, first encountered when he accompanied Thompson on the road trip that yielded Fear and Loathing: On the Campaign Trail ’72. 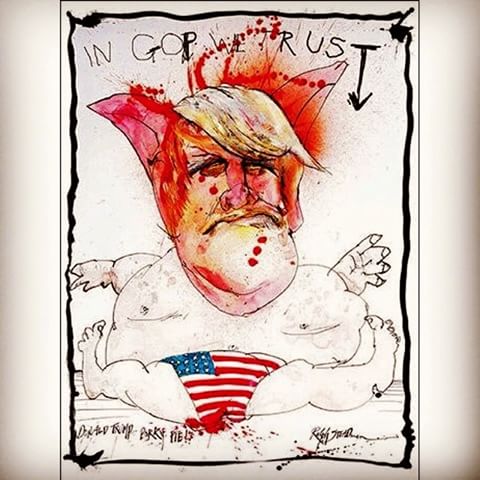 Donald Trump has given Steadman reason to come out fighting. With luck, he'll stay out as long as his services are required. The above portrait, titled “Porky Pie,” was sent, unsolicited, to Gerry Brakus, an editor of the New Statesman, who published it on December 17, 2015.

At the time, Steadman had no reason to believe the man he’d anthropomorphized as a human pig hybrid, squeezed into bloody flag-print underpants, would become the 45th president:

Trump is unthinkable. A thug and a molester. Who wants him?

The portrait's hideousness speaks volumes, but it’s also worth looking beyond the obvious-seeming inspiration for the title to a reference few Americans would get. "Pork pie"—or porky—is Cockney rhyming slang for “a lie.”

See a gallery of Steadman’s portraits of American presidents on his website.

Ayun Halliday is an author, illustrator, theater maker and Chief Primatologist of the East Village Inky zine.  Follow her @AyunHalliday