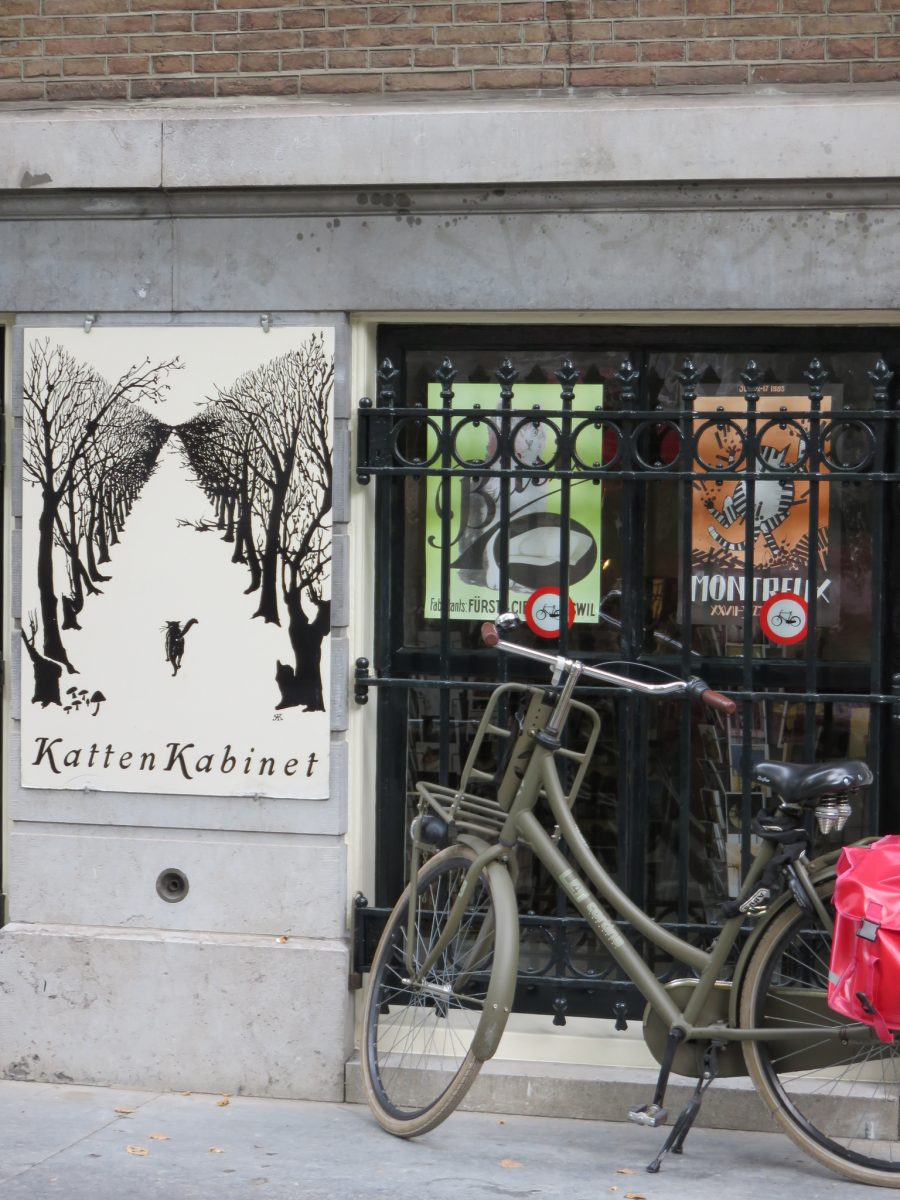 There’s been quite a bit of barking in the media lately to herald the reopening of the American Kennel Club Museum of the Dog, relocating from St. Louis to New York City’s Park Avenue.

What’s a cat person to do?

In contrast to the Museum of the Dog’s glitzy, glass-fronted HQ, the Cat Cabinet maintains a fairly low profile inside a 17th-century canal house. (Several visitors have noted in their Trip Advisor reviews that the 3-room museum’s grand environs help justify the €7  admission.)

The Museum of the Dog’s highly toted “digital experiences”  and redesigned atrium suggest a certain eagerness to establish itself as a major 21st-century institution.

The KattenKabinet is more of a stealth operation, created as an homage to one J.P. Morgan, a dearly departed ginger tom, who lived upstairs with his owner.

The inaugural collection took shape around presents the formidable Morgan received during his 17 years on earth—paintings, a bronze cat statue, and a facsimile of a dollar bill featuring his likeness and the motto, “We Trust No Dog.”

No apps, no interactive kiosks, a stolidly old fashioned approach when it comes to display…

It does have a gift shop, where one can purchase logo t-shirts featuring an extremely cat-like specimen, viewed from the rear, tail aloft.

While the KattenKabinet’s holdings include some marquee names—Picasso, Toulouse-Lautrec, and Rembrandt—there’s something compelling about the collection’s less well known artists, many of whom embraced the museum’s pet subject again and again. 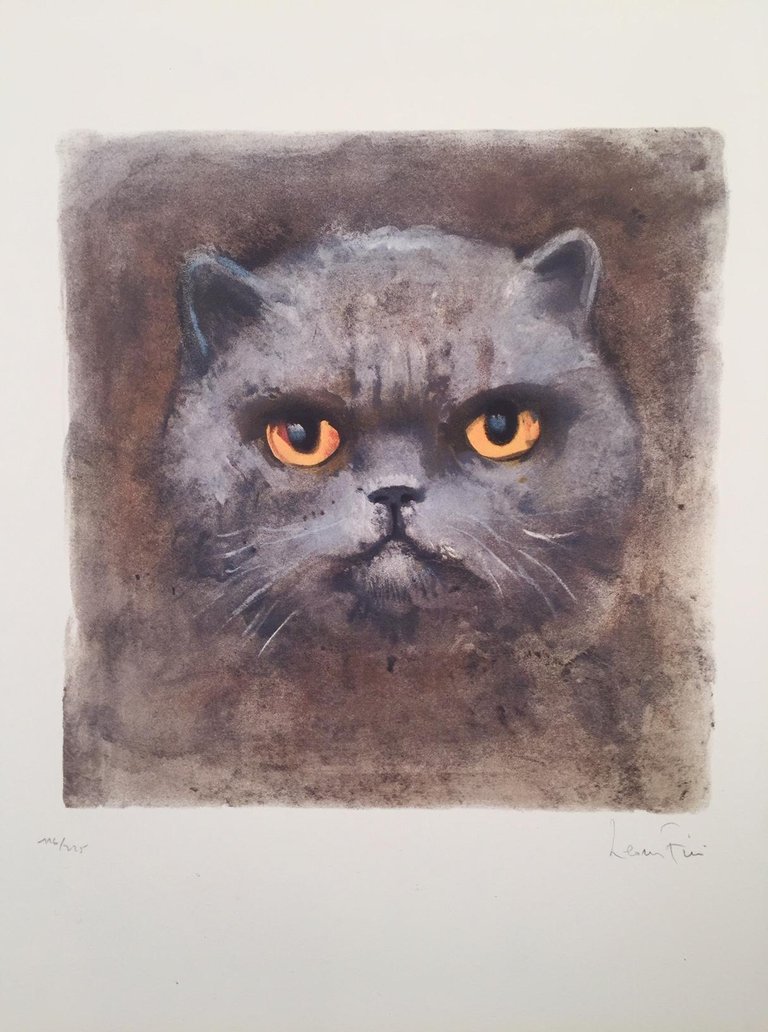 Fini had a three-way relationship with the Italian diplomat-cum-artist Stanislao LePri, who, like Fini, was difficult to pin into a certain style, and the Polish literary writer Constantin Jelenski. The two men were not, however, her only housemates: Fini had dozens of Persian cats around her. Indoors you rarely see a photo of her without a cat in her arms. In the Cat Cabinet you can find many of her works, from cheerfully colored cats to highly detailed portraits of cats. The women depicted in the paintings have that iconic mystique characteristic of Fini's work. 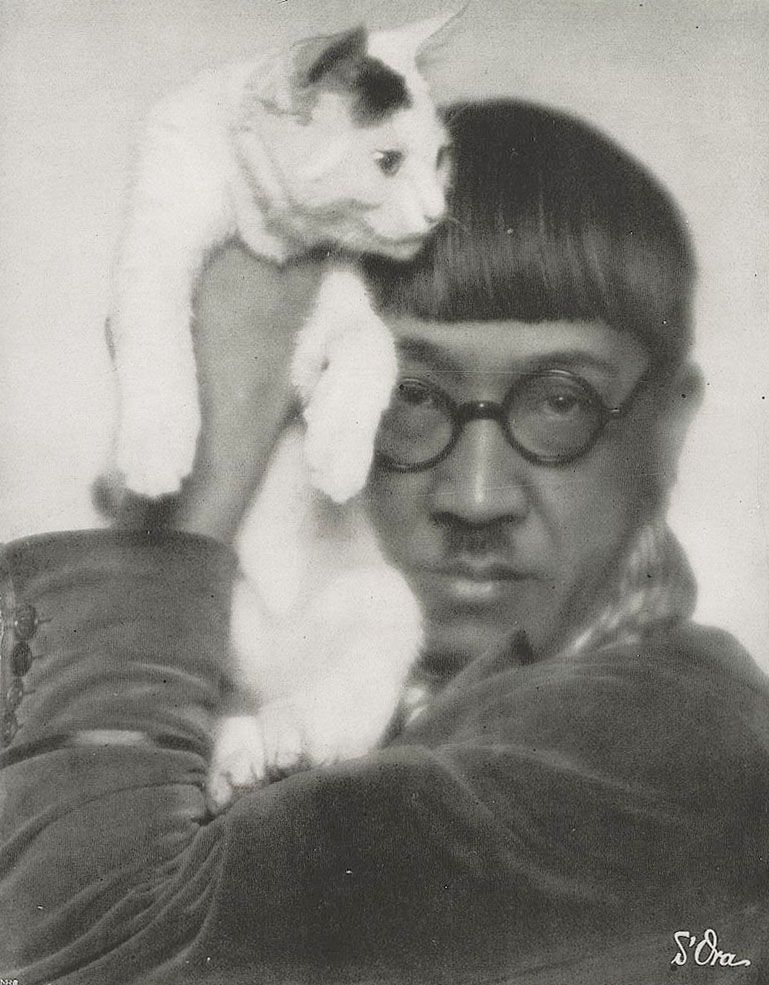 Tsuguharu Foujita, whose work is a staple of the museum, is another cat-loving-artist-turned-art-himself, by virtue of Dora Kalmus' 1927 portrait, above. 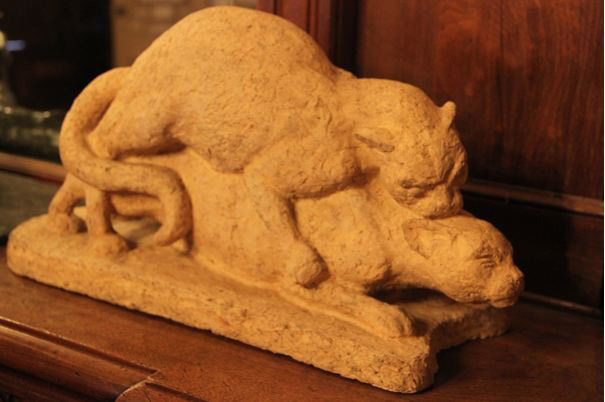 Hildo Krop is well represented throughout Amsterdam, his sculptures adorning bridges and buildings. Two Cats Making Love, on view at the Kabinet, is, Meijer comments,” clearly one of his smaller projects and probably falls into the category of "free work." One of his most famous works, and of a different order of magnitude, is the Berlage monument on Victorieplein in Amsterdam.”

In addition to fine art, the Kabinet showcases other feline appearances—in vintage advertising, Tadaaki Narita's Lucky cat pinball machine, and in the person, er, form of 5 live specimens who have the run of the place.

Those visiting in the flesh can cat around to some of Amsterdam’s other feline-themed attractions, including two cat cafes, a cat-centric boutique, and the floating shelter, De Poezenboot.

And let’s not forget the other cat museums ‘round the globe, from Minsk and Malaysia to Sylva, North Carolina’s American Museum of the House Cat.

Begin your exploration of the collection here.

Ayun Halliday is an author, illustrator, theater maker and Chief Primatologist of the East Village Inky zine.  Join her in New York City for the next installment of her book-based variety show, Necromancers of the Public Domain, this March. Follow her @AyunHalliday.E