The Band Everyone Thought Was The Beatles: Revisit the Klaatu Conspiracy of 1976

In 1976, hundreds of diehard Beatles fans became convinced that the mysterious album 3:47 EST by the band Klaatu was actually a new release from The Beatles in disguise, after a DJ in Providence, Rhode Island played one of its songs on the radio. Shortly afterward, Steve Smith discovered the album at the newspaper he worked for, Rhode Island’s The Providence Journal, listened to it, and became immediately intrigued.

The album contained no photographs, no identifying information at all, and the band’s The Day the Earth Stood Still reference echoed the cover of Ringo Starr’s album Goodnight Vienna. Smith heard Starr’s drumming, Harrison’s guitars, Lennon and McCartney’s voices in the psychedelic songs. Though he wasn’t a music critic or reporter himself, he persuaded the paper to publish a feature in which he suggested Klaatu could be The Beatles.

The “Klaatu Konspiracy” spread. An Australian fan issued a 34-page booklet on the case. Executives at Klaatu’s label, Capital Records Canada, refused to confirm or deny, enjoying the publicity, as Smith recalled in a 1997 interview.

More specifically, “hedging his bets,” writes Ken Raisanen for WOAS FM, Smith concluded that “the mystery band could be 1) The Beatles. 2) A couple of the Beatles with other people. 3) A Beatles-backed band. 4) A completely unknown but ingenious and talented band.” If the American Smith had caught an episode of Keith Hampshire’s Music Machine on CBC two years earlier, he would have seen the evidence of number four (see the real Klaatu play “California Jam” in 1974, above). But the band otherwise made an effort to obscure their identity.

As Klaatu bassist Jon Woloshuck told Goldmine magazine in 2013, one reason for the air of mystery they cultivated is that “we were just three guys from Toronto.” They wanted the music to speak for itself, and “nobody knew who were anyway.” They were amused by the rumor. “It caught us by surprise,” says drummer Terry Draper, but they “didn’t think much of it at the time…. We were all big Beatles fans, and we were hoping they would reunite. At the time, the idea of a reunited Beatles wasn’t all that far-fetched at all.”

These attitudes may have been prevalent, but Klaatu wasn't deliberately setting out to tap into them, they say, but to “do music that was on par” with “late ‘60s progressive bands like King Crimson and The Moody Blues.” They’re clearly also channeling The Beatles, whether they admit it or not. Still the “rumor did us as much harm as good,” says guitarist Dee Long. “It got us noticed, which was great, but also led to a situation where we could not ever really measure up to expectations.” Hear what Beatles fans and Klaatu conspiracists heard in 1976 in the song “Sub Rosa Subway” above from 3:47 EST, and learn more about the Klaatu conspiracy theory in the Polyphonic video at the top. 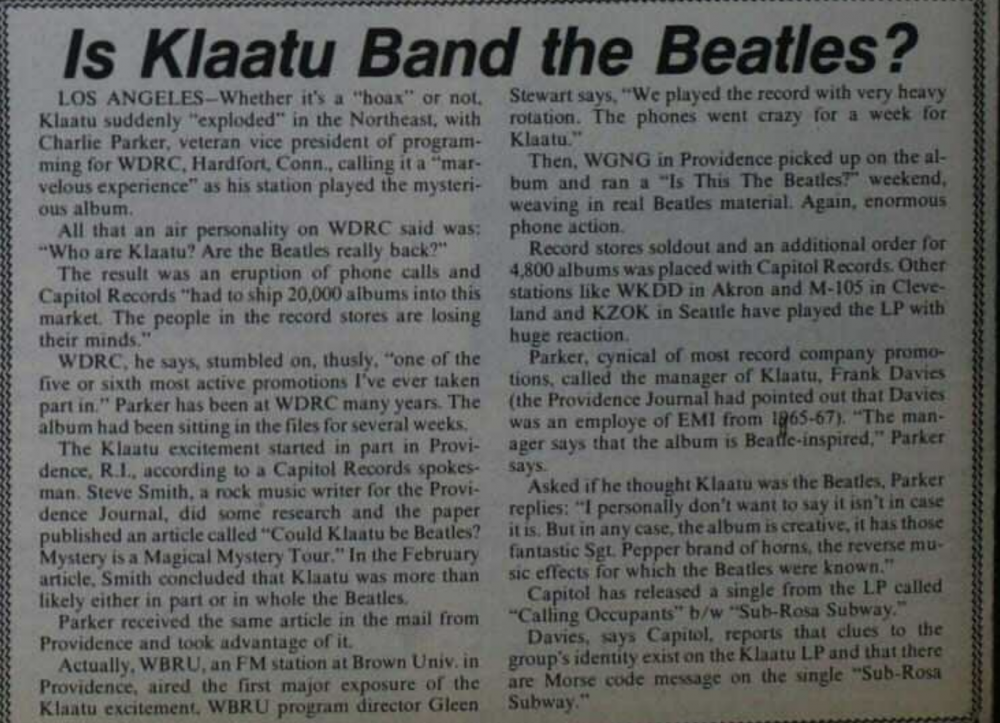 Did Lennon or McCartney Write the Beatles 1965 Song “In My Life”? A Math Professor, Using Statistics, Solves the Decades-Old Mystery

A 17-Hour Chronological Playlist of Beatles Songs: 338 Tracks Let You Hear the Musical Evolution of the Iconic Band