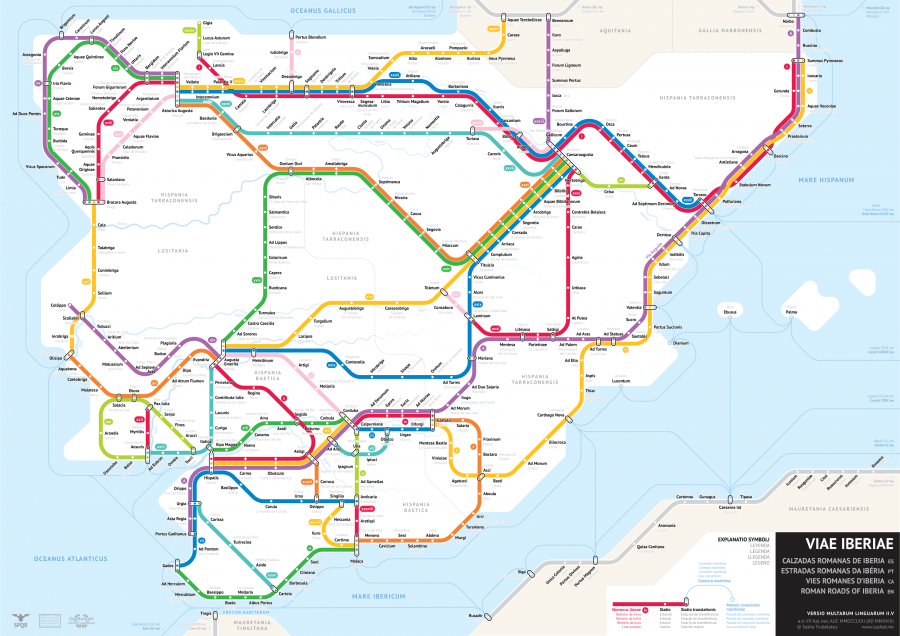 Between the first century BC and the fourth century AD, Rome displayed what we might call an impressive ambition. In his project illustrating those chapters of history in a way no one has before, statistics student Sasha Trubetskoy has shown increasingly Roman-grade ambitions himself, at least in the realm of historical graphic design. We've previously featured his modern subway-style maps of the roads of the Roman Empire as well as the Roman roads of Britain here on Open Culture. Today, we have his map of the Roman Roads of Iberia, the region today occupied mainly by Spain and Portugal.

"This map was a blast to make," writes Trubetskoy. "I chose to follow the Antonine Itinerary more strictly, which meant that I had to deal with many parallel lines." Also known as the itinerary of the Emperor Antoninus or “Itinerarium Provinciarum Antoni(ni) Augusti,” according to the Roman Roads Research Association, the Antonine Itinerary is "a collection of 225 lists of stopping places along various Roman roads across the Roman Empire." Its value "comes from it being one of a very few documents to have survived to modern times which provide detail of names and clues to the location of Roman sites and the routes of roads."

Each list, or iter, that makes up the Antonine Itinerary "gives the start and end of each route, with the total mileage of that route, followed by a list of intermediate points with the distances in between." In creating his Roman Roads of Iberia subway map, Trubetskoy made each iter into its own "line," though for some of them he had to draw from other sources: "A couple of Antonine routes were ambiguous and not easily placed on a map, while a few important routes were missing for which there is archaeological evidence."

It takes no small amount of work to convert this kind of often patchy and scattered knowledge from ancient history into graphics as cleanly and legibly designed as Trubetskoy's Roman-road subway maps. But the result, apart from offering a nifty juxtaposition of past and present, reminds us of what the roads of the Romain Empire actually meant: a degree of connectedness between distant lands never before achieved in human history. You can support Trubetskoy's efforts to show this to us in ever greater detail by making the US$9 suggested donation to download a high-resolution version of the Roman Roads of Iberia map. Rome wasn't built in a day, much less its empire: the complete subway-mapping of Rome's roads will also require more time and labor — but then, would the builders of the Roman Empire have described their task as a "blast"?