William S. Burroughs’ Manifesto for Overthrowing a Corrupt Government with Fake News and Other Prophetic Methods: It’s Now Published for the First Time 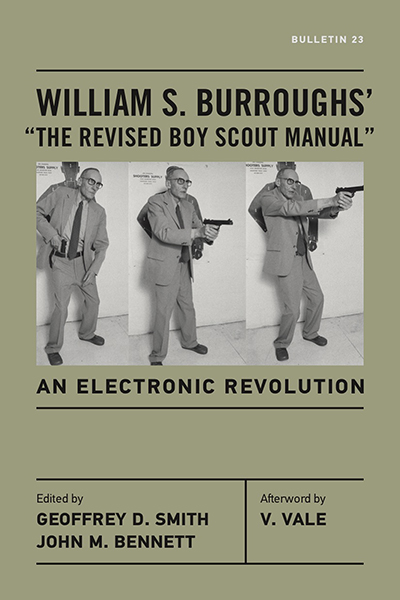 The Boy Scouts of America have faced some deserved criticism, undeserved ridicule, and have been cruelly used as props, but I think it’s safe to say that they still bear a pretty wholesome image for a majority of Americans. That was probably no less the case and perhaps a good deal more so in 1969, but the end of the sixties was not by any stretch a simpler time. It was a period, writes Scott McLemee, “when the My Lai Massacre, the Manson Family and the Weather Underground were all in the news.” The Zodiac Killer was on the loose, a general air of bleakness prevailed.

William S. Burroughs responded to this madness with a counter-madness of his own in "The Revised Boy Scout Manual," “an impassioned yet sometimes incoherent rebuke to ossified political ideologies,” writes Kirkus. We can presume Burroughs meant his instructions for overthrowing corrupt governments to satirically comment on the outdoorsy status quo youth cult. But we can also see the manual taking as its starting point certain values the Scouts champion, at their best: obsessive attention to detail, MacGyver-like ingenuity, and good old American self-reliance.

Want to bring down the government? You can do it yourself… with fake news.

Boing Boing quotes a long passage from the book that shows Burroughs as a comprehensive, if not quite wholesome, Scout advisor, describing how one might use mass media’s methods to disrupt its message, and to transmit messages of your own. We might think he is foreseeing, even recommending, techniques we now see used to a no-longer-shocking degree.

You have an advantage which your opposing player does not have. He must conceal his manipulations. You are under no such necessity. In fact you can advertise the fact that you are writing news in advance and trying to make it happen by techniques which anybody can use.

And that makes you NEWS. And a TV personality as well, if you play it right.

We might read in Burroughs’ instructions the methods of YouTube propagandists, social media manipulators, and some of the most powerful people in the world. Burroughs does not recommend taking over the media apparatus by seizing its power, but rather using technology to make “cutup video tapes” and ham radio broadcasts featuring documentary media spliced together with fabrications. These “techniques could swamp the mass media with total illusion,” he writes. “It will be seen that the falsifications in syllabic Western languages are in point of fact actual virus mechanisms.”

Burroughs is not simply writing a reference for making fearmongering propaganda. Even when it comes to the subject of fear, he sometimes sounds as if he is revising Sergei Eisenstein’s montage theory for his own similarly violent times. “Let us say the message is fear. For this we take all the past fear shots of the subject we can collect or evoke. We cut these in with fear words and pictures, with threats, etc. This is all acted out and would be upsetting enough in any case. Now let’s try it scrambled and see if we get an even stronger effect.”

What would this effect be? One “comparable to post-hypnotic suggestion”? Who is the audience, and would they be, a la Clockwork Orange, a captive one? Did Burroughs see people on street corners screening their cut-up videos, despite the fact that consumer-level video technology did not yet exist? Is this a cinematic experiment, mass media-age occult ritual, compendium of practical magic for insider media adepts?

See what you can make of Burroughs’ "The Revised Boy Scout Manual" (subtitled “an electronic revolution”). The book has been reissued by the Ohio State Press, with an afterword (read it here) by V. Vale, publisher of the legendary, radical magazine RE/Search, who excerpted a part of the “Revised Manual” in the early 1980s and planned to publish it in full before “a personal relationship blowup” put an end to the project.

McLemee titles his review of Burrough’s rediscovered manifesto “Distant Early Warning,” and much of it does indeed sound eerily prophetic. But we should also bear in mind the book is itself a countercultural pastiche, designed to scramble minds for reasons only Burroughs truly knew. He was a “practicing Scientologist at the time” of the book’s composition, “albeit not for much longer,” and he does prescribe use of the e-meter and makes scattered references to L. Ron Hubbard. But as a practitioner of his own precepts, Burroughs would not have written a monograph uncritically promoting one belief system or another. (Well, maybe just the once.) He also quotes Hassan-I Sabbah, discusses Mayan hieroglyphics, and talks General Semantics.

"The Revised Boy Scout Manual" “has elements of libertarian manifesto, paramilitary handbook, revenge fantasy and dark satire,” McLemee writes, “and wherever the line between fiction and nonfiction may be, it’s never clear for long.” In this, Burroughs only scrambles elements already in abundance at the end of the sixties and in the early seventies, during which he revised and recorded the work several times as he transitioned himself out of an organization that maintained total control through mass media. Like Marshall McLuhan, Noam Chomsky and others, he was beginning to see this phenomenon everywhere he looked. Burroughs' most lasting influence may be that, like the late-60s Situationists, he devised a cunning and effective way to turn mass media in on itself, one with perhaps more sinister implications.