Kraftwerk put out their eighth studio album in 1981, and they titled it presciently: Computer World was released into what humanity had only just begun to realize would become a world of computers. But back then, most people either had never used a computer at all, or had used no computer more advanced than a pocket calculator. But the boys from Düsseldorf had a song for them too: the album's first single "Pocket Calculator." And it wasn't just a name: the Casio fx-501P programmable calculator appeared on the list of "instruments" used in its recording. 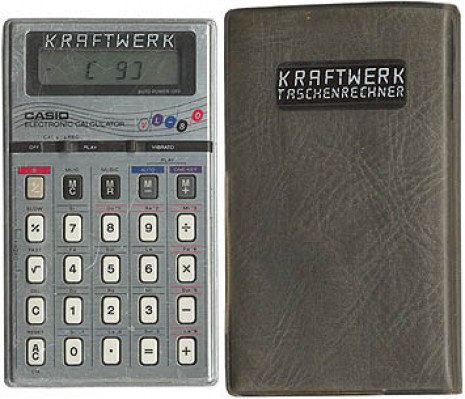 Kraftwerk had become world-famous by the early 1980s, and on the international music scene they parodied the stiff, precision-obsessed German stereotype to perfection. You'd think that they would thus demonstrate allegiance to the formidable Dieter Rams-designed Braun ET55 calculator, but by the time Computer Love came out, Japanese companies like Casio had come to dominate the personal-electronics market. Kraftwerk even recorded a Japanese version of "Pocket Calulator," "Dentaku," along with ones in German ("Taschenrechner"), French ("Mini Calculateur"), and Italian ("Mini Calcolatore").

"I'm the operator with my pocket calculator," go the song's English lyrics. "I am adding and subtracting. I'm controlling and composing." And whichever language you listen to it in, it has a line equivalent to, "By pressing down a special key, it plays a little melody."

Kraftwerk actually commissioned as a promotional item a special calculator from Casio that could do just that, a version of the company's VL-80 model that was also a musical synthesizer. You can see and hear the basic, non-Kraftwerk model demonstrated in the video above. Casio, a name that in the music world would become a byword for simple, inexpensive synthesizers, had already brought to market in 1979 the VL-1, the first commercial digital synthesizer (which itself included a calculator function). 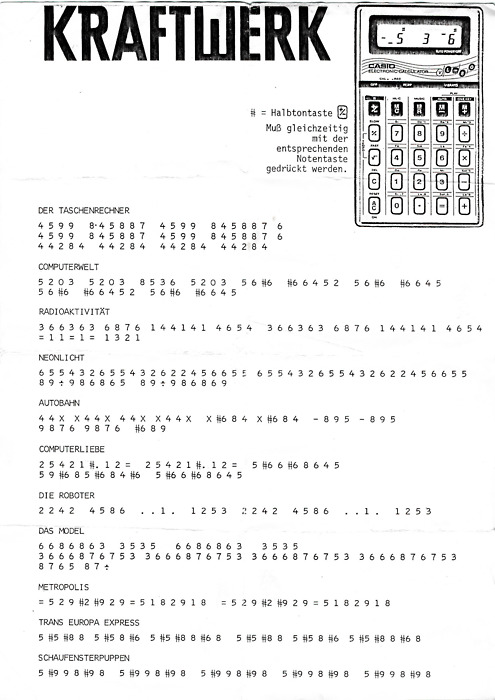 With a Kraftwerk taschenrechner, even those without technical or musical knowledge, let alone a full-fledged synthesizer, could make music. "Kraftwerk was eager for fans to play Kraftwerk hits on their own calculators," writes Dangerous Minds' Martin Schneider, "so they issued these special instructions — OK, let’s call it 'sheet music' — to play not just the new material but also classics like 'Trans Europa Express' and 'Schaufensterpuppen.'" Today, Kraftwerk continues to perform all over the computer world in which we now live. With the 40th anniversary of Computer World approaching, perhaps the time has come to bring the calculators back on stage.

The Psychedelic Animated Video for Kraftwerk’s “Autobahn” from 1979

Kraftwerk Plays a Live 40-Minute Version of their Signature Song “Autobahn:” A Soundtrack for a Long Road Trip (1974)