In 1968, Terry Gilliam was a young American cartoonist living in London. He was having trouble making a living from magazine work, so his friend John Cleese suggested he get in touch with Humphrey Barclay, who was producing a slightly subversive television show for children called Do Not Adjust Your Set.

Subtitled “The Fairly Pointless Show,” it featured a group of previously unknown actors including Eric Idle, Michael Palin and Terry Jones, and attracted a cult following among adults. Barclay looked at Gilliam’s portfolio and decided he would fit right in.

For one early assignment, Gilliam was asked to prepare something for a special show to be broadcast on Christmas day, 1968, called Do Not Adjust Your Stocking. Looking for inspiration, he decided to visit the Tate Gallery. In The Pythons Autobiography of the Pythons, Gilliam remembered the project and how it figured into his emerging artistic style:

I went down to the Tate and they’ve got a huge collection of Victorian Christmas cards so I went through the collection and photocopied things and started moving them around. So the style just developed out of that rather than any planning being involved. I never analysed the stuff, I just did it the quickest, easiest way. And I could use images I really loved.

The result (above) is a hilarious free-associational send-up of traditional Christmas card motifs. In addition to being aired on the show, The Christmas Card was incorporated into Gilliam’s short debut film from 1968, Storytime, which is part of our collection of Free Movies Online.

For an update of Gilliam’s twisted take on Christmas–a darker reworking of his Malevolent Santa theme in The Christmas Card–look below for a drawing Gilliam posted a few days ago on his Facebook page. And as the man says, you better watch out! 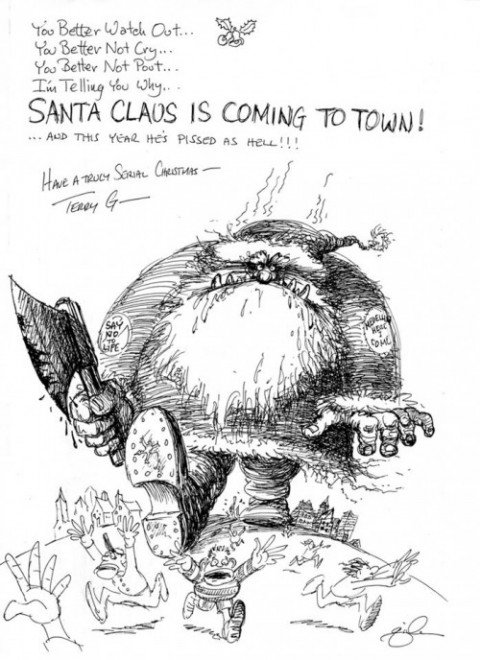