Do You Speak Java Jive?: The Language of the Indie Cafes 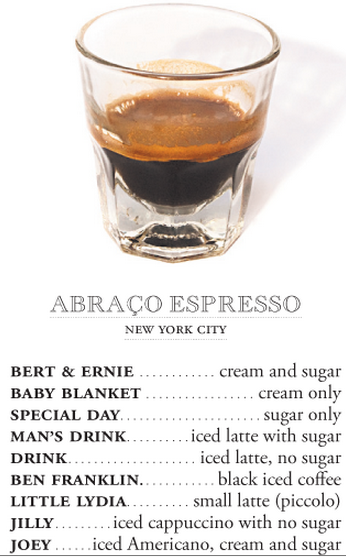 I haven’t frequented Starbucks for a long time, but when I did, I could never get into their lingo. Do you want a “grande,” the “barista” asked? No, just give me a medium, ok? And if I ever tired of the irritating lingo battles, I headed to an indie cafe where simple language made sense.

Nowadays, you apparently can’t bank on the indies for an escape. This weekend, The New York Times has a huge spread revealing the private vocabularies of America’s indie coffee bars, the places where you can now order “Cappuccigos,” “Jillys,” “Kanskis,” and a “Frankencaf,” along with some “Bert & Ernie,” apparently the new way of saying cream and sugar. If you care to speak Java Jive, you’ll want to spend time with this spread. It’s almost something we could add to our list of Free Foreign Language Lessons.

And now for some more coffee randomness: