A History of Pussy Riot: Watch the Band’s Early Performances/Protests Against the Putin Regime

Recently attacked by Cossacks in Sochi and by black-clad men with green antiseptic in Moldova, Nadezhda Tolokonnikova and Maria Alyokhina have, since their December release from a two-year prison sentence, remained the very public faces of the punk band/agit-prop collective known as Pussy Riot. The two also continue to raise the band’s profile in the States. Last month alone, they appeared on The Colbert Report and onstage with Madonna at a star-studded Amnesty International event.

Not only prominent activists for prison reform, Nadia and Masha—as they’re called in the HBO documentary Pussy Riot: A Punk Prayer—have become celebrities. (So much so that other mostly anonymous members of the group have disowned them, citing among other things issues with “personality cult.”) The HBO doc begins with profiles of the women, as does a new book, Words Will Break Cement: The Passion of Pussy Riot, by Russian journalist Masha Gessen.

In an interview Friday for KQED in San Francisco  (above), Gessen—a lesbian mother who recently moved to the United States for fear of persecution—describes how Vladimir Putin, Pussy Riot’s primary target, has regained his popularity with the Russian people after his aggressions at the Ukraine border and Crimea’s Sunday vote for secession. She cites, for example, alarming poll numbers of only 6% of Russians who oppose an invasion of Ukraine. Yet at the time of Pussy Riot’s infamous performance at a Moscow cathedral in February of 2012, which led to Tolokinnikova and Alyokhina’s imprisonment, the anti-Putin protest movement made the autocratic ruler very nervous. 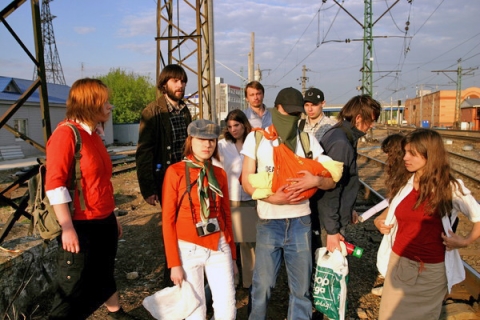 Gessen sketches the history of the movement in her interview (and details it in the book). At first the protests involved the situationist antics of performance art collective Voina—“War”—(see Tolokonnikova, above at far right, with other Voina members in 2008). The feminist punk band has only emerged in the past three years, when Voina’s art-school pranks became Pussy Riot’s provocations days after Putin announced his intent to return to the presidency.

One month before the cathedral performance that sent Nadia and Masha to prison, the band appeared in their trademark fluorescent dresses and balaclavas in Red Square (top). Only three months prior, on October 1, 2011, they released their first song, “Ubey seksista” (“Kill the Sexist”) and—as members of Voina—announced the arrival of Pussy Riot, a radical opposition to the authoritarianism, patriarchy, and crony capitalism they allege characterize Putin’s rule.

In November of 2011, Pussy Riot staged its first public performance (above), scaling atop scaffolding and Moscow trolley and subway cars while scattering feathers and dancing to their song “Osvobodi Bruschatku” (“Release the Cobblestones”). The song recommends that Russians throw cobblestones in street protests because–as Salon quotes from the group’s blog—“ballots will be used as toilet paper” in the approaching elections.

The collective next released the video for “Kropotkin Vodka” (above), featuring a montage of public appearances in fashionable locations around Moscow. The locations were chosen, the band writes, specifically as “forbidden sites in Moscow.” More from their (Google-translated) blog below:

The concerts were held in public places [for] wealthy putinists: boutiques in the capital, at fashion shows, luxury cars and roofs close to Kremlin bars […] Performances included arson and a series of musical occupations [of] glamorous areas of the capital.

The song takes its title and inspiration from Peter Kropotkin, the 19th century Russian aristocrat-turned-anarcho-communist intellectual.

In their open letter publicly releasing their two most prominent members from the group, six members of Pussy Riot write that the “ideals of the group” Nadia and Masha have allegedly abandoned were precisely “the cause for their unjust punishment.” The two have become, they say, “institutionalized advocates of prisoners’ rights.” And yet in mid-December, 2011, the band performed their song “Death to Prison, Freedom to Protests” on the rooftop of a detention center holding opposition leaders and activists. This was at the height of the anti-Putin movement when upwards of 100,000 people took to the streets of Moscow chanting “Russia without Putin” and “Putin is a Thief” and demanding free elections. 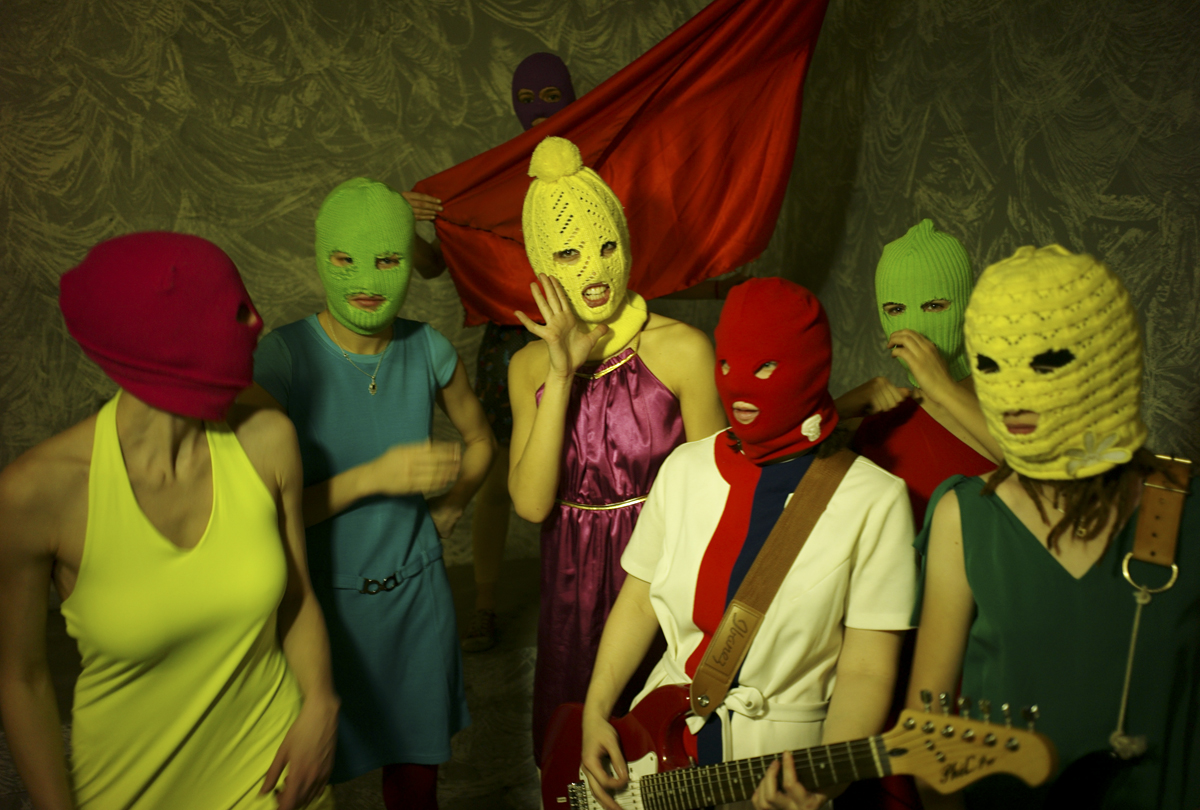 While most of us only heard of Pussy Riot after their arrest and trial for the cathedral stunt, their “breakthrough performance,” writes Salon, occurred  one month earlier at the Red Square appearance at the top of the post. This was when the band decided to “take revolt to the Kremlin,” and coincided with promises from Putin to reform elections. “The revolution should be done by women,” said one member at the time. “For now, they don’t beat us or jail us as much.” The situation would turn rather quickly only weeks later, and it was with Pussy Riot, says Gessen, that the wave of arrests and beatings of protesters began. The band’s current schism comes just as the anti-Putin movement seems to be fracturing and losing resolve, and the future of democratic opposition in Putin’s increasingly belligerent Russia seems entirely uncertain.