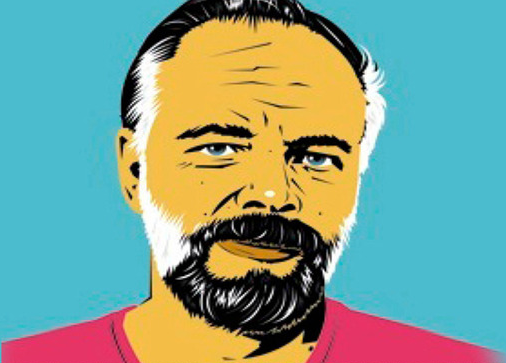 It happened following surgery for an impacted wisdom tooth. While recovering, the author of Ubik and The Man in the High Castle, received a delivery of pain medication. The delivery girl wore a Jesus fish around her neck, which in Dick’s perception was emitting a pink beam. Soon after, Dick’s brain was invaded by… something. Dick never quite figured out what.

He later described the experience to interviewer Charles Platt as “an invasion of my mind by a transcendentally rational mind. It was almost as if I had been insane all of my life and suddenly I had become sane.”

The experience profoundly affected him and it made up the core of his book VALIS. The title is an acronym for Vast Active Living Intelligence System, which pretty much describes how Dick thought of this mind.

In 1979, Platt interviewed Dick in depth for his book Dream Makers. You can listen to an extended clip of Dick recounting his transcendental experience below:

Whatever it was, this mind took control of Dick when he was at a low ebb and, like a loving parent or an exceptionally talented personal assistant, cleaned up his life. “I was a spectator,” said Dick. This mind, which Dick characterized as female, fired his agent, tracked down editors who were late sending checks and modified his diet.

She also revealed that his young son had an undiagnosed birth defect that was potentially fatal. And the revelation proved to be true. The child’s life was saved.

That said, he did have a couple minor complaints about the entity: she kept calling his baffled wife “Ma’am” and she had a tendency to lapse into Koine Greek. Nobody, even a God-like vision, is perfect. Above, we have a drawing by R. Crumb.

You can listen to Platt’s full interview with Dick below: