The Colors of Mister Rogers’ Hand-Knit Sweaters from 1979 to 2001: A Visual Graph Created with Data Science 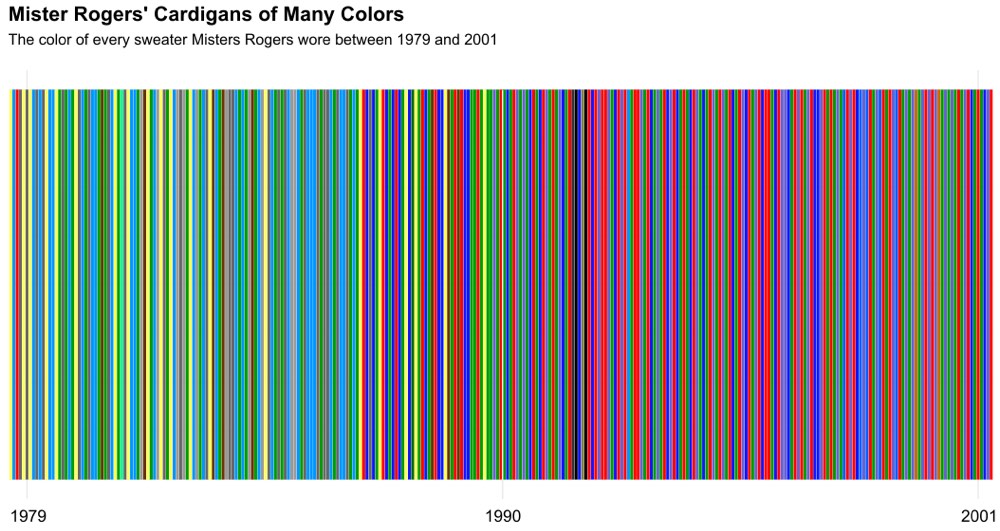 Writer Owen Phillips may be a solid data analyst, but I suspect he’s not much of a knitter.

The software he used to run a scientific analysis of 22 years worth of Fred Rogers’ sweaters ultimately reduces the beloved children’s television host’s homey zip-front cardigans to a slick graphic of colorful bars.

A knitter would no doubt prioritize other types of patterns – stitch numbers, wool weight, cable variations…the sort of information Mister Rogers’ mother, Nancy, would have had at her fingertips.

As Mister Rogers reveals in the story of his sweaters, his mom was the knitter behind many of the on-air sweaters Phillips crunched with R code. Whether their subtly shifting palette reflects an adventurous spirit on the part of the maker or the recipient’s evolving taste is not for us to know.

After Mrs. Rogers’ death, producers had to resort to buying similar models. Many of her originals had worn through or been donated to charity events.

“Not an easy challenge in the 80’s and 90s,” Margy Whitmer, a producer of Mister Rogers’ Neighborhood told Rewire. “It certainly wasn’t in style! But we found a company who made cotton ones that were similar, so we bought a bunch and dyed them.”

It would be interesting to see what Phillips’ code could do with faulty viewer memories.

His input for the Mister Rogers’ Cardigans of Many Colors project was a chart on super fan Tim Lybarger’s Neighborhood Archive detailing the hue of every sweater Mister Rogers changed into on-camera from 1979 to 2001.

Without samples of the actual sweaters, Lybarger’s color chart could only be approximate, but unlike viewers’ fading memories, it’s rooted in his own visual observations of distinct episodes. Aging fans tend to jettison Rogers’ spectral reality in favor of a single shade, the bright red in which he greeted Wicked Witch of the West Margaret Hamilton in 1975, say, or the pleasant mouse-colored number he sported for a 1985 breakdancing session with a visiting 12-year-old.

For those who’d rather code than purl, Phillips shares MrRogers.R, the program he used to scrape the Neighborhood Archive for Mister Rogers daily sweater colors.

Then have a look at Rogers’ sweaters as rendered by Phillips’ fellow data geek, Alan Joyce, who tinkered with Phillips’ code to produce a gradient image.

Ayun Halliday is an author, illustrator, theater maker and Chief Primatologist of the East Village Inky zine.  Her current project is Theater of the Apes Sub-Adult Division’s fast approaching production of Animal Farm at the Tank in New York City.  Follow her @AyunHalliday.