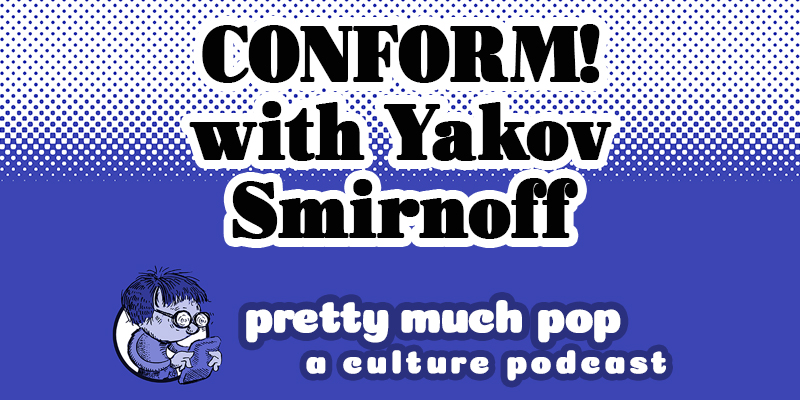 Is media trying to brainwash us into being ALL THE SAME? Are the excesses of the mob scaring us into conformity? And does this in turn keep us from being actually creative, with healthy relationships?

Mark Linsenmayer, Erica Spyres, and Brian Hirt muse on cultural homogenization and a few sci-fi takes on forced sameness and then bring out our first celebrity guest, beloved comedian and now psychology Ph.D. Yakov Smirnoff, who tells us about growing up in a repressive society and his fears that political correctness and a lack of appreciation for the “reciprocal opposites” necessary for authentic communication is leading us in that direction. We conclude with a bit of host-ful response.

We touch on Cat’s Cradle, Aladdin, Rosanne Barr, The Twilight Zone, Brian’s wearing a Cubs hat in Missouri, and performing comedy in the U.S.S.R. as well as various sensitive audiences here. Will you not join us and dress as Devo every day?

No, we are not a politics podcast, but sometimes when we reflect on the dynamics involved with our being entertained,  politics is hard to avoid! You may enjoy listening to The Partially Examined Life (Mark’s philosophy podcast) discuss Adorno on the Culture Industry, or perhaps their discussion of the world of technological unemployment.

Get more at prettymuchpop.com. Subscribe on Apple Podcasts, Stitcher, or Google Play. Pretty Much Pop: A Culture Podcast is produced by the Partially Examined Life Podcast Network.

Follow Yakov:  @Yakov_Smirnoff. Not enough Yakov? Well, of course there are scads of YouTube clips and other podcast appearances that he’s done that you can check out with a mere web search, but if you want to hear EVERY SINGLE WORD he said to us, we did post an entirely unedited version of the interview for $5 supporters at patreon.com/prettymuchpop.