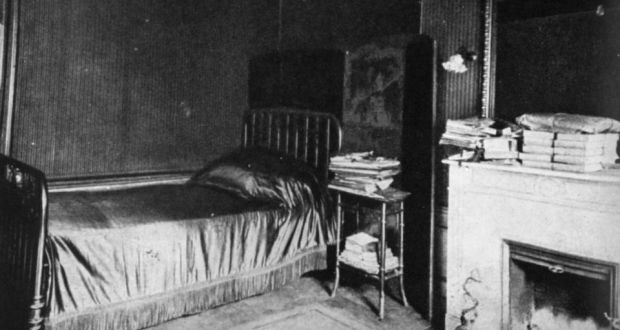 Many of us now find ourselves stuck at home, doing our part to put a stop to the global coronavirus pandemic. Some of us are taking the opportunity to write the ambitious works of literature we’ve long intended to. Such an effort of creativity in confinement has no more suitable precedent than the life of Marcel Proust, who wrote much of his seven-volume masterpiece In Search of Lost Time (À la recherche du temps perdu) in bed. The Paris Review‘s Sadie Stein quotes Proust’s biographer Diana Fuss describing him as having written “from a semi-recumbent position, suspended midway between the realms of sleeping and waking using his knees as a desk.”

He did it in a bedroom lined with cork, an addition meant, Stein writes, “not just to soundproof but to prevent pollen and dust from aggravating Proust’s allergies and asthma.” Though the Spanish flu did make its way into France during Proust’s last years, the writer had been worried about his own frail health since his first asthma attack at the age of nine.

He got the idea of lining his bedroom with cork from his friend Anna de Noailles, “a princess and socialite, a patron of the arts and a novelist in her own right,” who also happened to be “plagued with debilitating fears and neuroses.” You can visit faithful reconstructions of both of their bedrooms at Paris Musée Carnavalet, an essential stop on any Proust pilgrimage. So is the Hôtel Ritz Paris, which maintains a “Marcel Proust suite.”

William Friedkin — yes, that William Friedkin — stayed in the Marcel Proust suite, “formerly a private dining room on the hotel’s second floor, where Proust often hosted small dinner parties,” on the Proust pilgrimage he recalls in The New York Times. “I was told by the hotel manager that the room was reserved for Proust to entertain whenever he could venture out from his cork-lined bedroom at 102 Boulevard Haussmann.” No doubt Proust “absorbed inspiration from conversations here, ones that made their way into his writing.” In the last three years of his life, the writing almost entirely displaced the conversation: Proust spent almost all his time in his cork-lined bedroom, sleeping by day and putting everything he had into his work at night. A contemporary photograph of Proust’s cork-lined bedroom appears at the top of the post, as recently included in a tweet by writer Ted Gioia calling Proust the “master of social distancing.”

Just above, you can watch a talk on the writer’s room and hypersensitivities (of both the aesthetic and physical varieties) that put him into it by Proust scholar William C. Carter, author of Marcel Proust: A Life and Proust in Love. What might Proust’s father, the epidemiologist Adrien Proust, have thought about a new epidemic making the people of the 21st century look to his son?  Even if we don’t take him as a model for writing life, this is nevertheless an appropriate moment to read his work (now available free online at the Internet Archive’s National Emergency Library). “What Proust inspires in us is to see and to appreciate every seemingly insignificant place or object or person in our lives,” writes Friedkin, “to realize that life itself is a gift and all the people we’ve come to know have qualities worth considering and celebrating — in time.”

An Introduction to the Literary Philosophy of Marcel Proust, Presented in a Monty Python-Style Animation