Do you remember the 60s, when a fiscal crisis and white flight resulted in thousands of vacant lots and abandoned buildings in low income neighborhoods?

Activists like Hattie Carthan and Liz Christy sprung from such soil, creating youth programs, hauling away debris, and putting constant pressure on elected officials to transform those urban wastelands into green oases.

Verdant sites like the Bowery Houston Community Farm and Garden (now known as the Liz Christy Garden) improved air quality, lowered temperatures, and offered a pleasant gathering place for neighbors of all ages.

As Yonnette Fleming, founder of the community-led market at the Hattie Carthan Community Garden and Farmer’s Market, says in the above episode of Vox’s Missing Chapter: “Community gardens grow communities, for the people, to be run by the people, for the benefit of the people.”

In the mid-90s, newly elected Mayor Rudy Giuliani sided with developers over citizens. More than half of the city’s gardens were bulldozed to make way for luxury residences.

Traditionally low-rise neighborhoods like the East Village and Brooklyn’s Bed-Stuyvesant would become increasingly fashionable during the early days of the new millennium. New arrivals with little interest in neighborhood history might assume that the sidewalks had always been lined with cute cafes and hipster bars, not to mention trees. (In reality, Carthan was 64 when she began her successful campaign to line Bed-Stuy with trees, and landmark a venerable Magnolia that was at risk of being torn down.)

Perhaps hoping to command younger viewers’ attention, Vox’s Missing Chapter opens not with the rich history of New York City’s community gardens, but rather the many recipes for seed bombs on TikTok. The glass half full perspective on our 500-strong surviving gardens can ring a bit empty to those who lost the fight to preserve a number of East Harlem gardens just a few short years ago.

Don’t forget your roots! Christy’s typewritten, hand illustrated Green Guerillas recipe for seed bombs is below. (If you want to try it at home, please use seeds native to your area.) 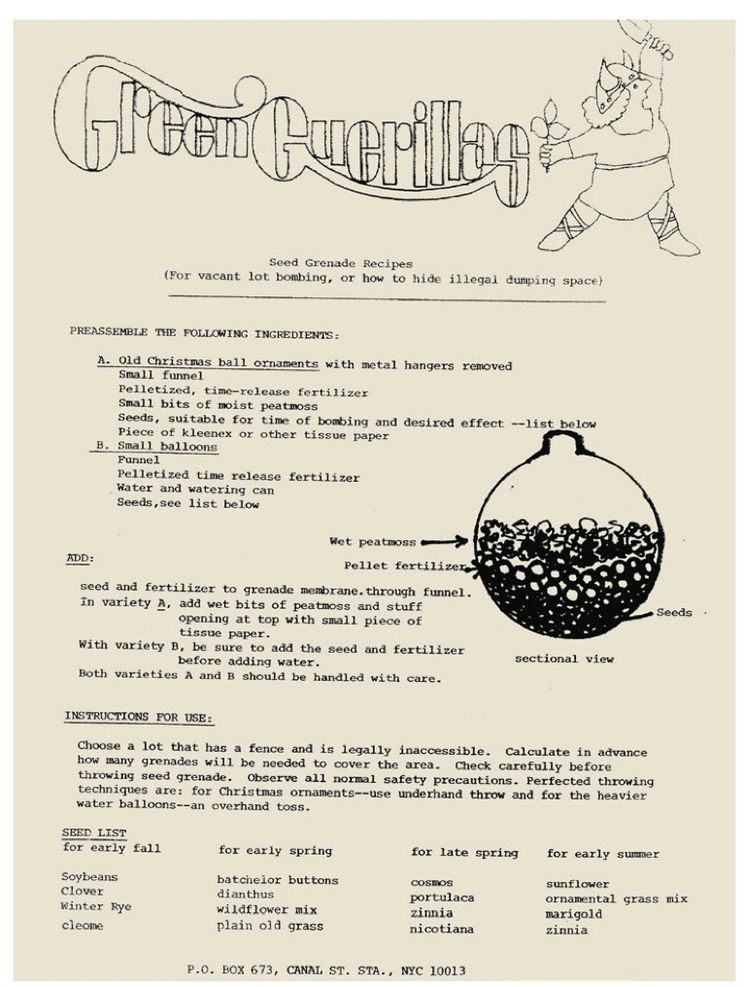