How Ramen Became the Currency of Choice in Prison, Beating Out Cigarettes

The last decade ushered in a slew of traditional Japanese-style ramen restaurants — enough to justify ramen maps to New York City, Chicago, and the Bay Area.

Yet most Americans still conceive of ramen as the pack of seasoning and dehydrated instant noodles that have long sustained broke artists and college students.

Add incarcerated persons to the list of packaged ramen’s most ardent consumers.

In the above episode of Vox’s series, The Goods, we learn how those ubiquitous cellophane packages have outstripped cigarettes and postage stamps as the preferred form of prison currency.

Ramen is durable, portable, packaged in standard units, available in the prison commissary, and highly prized by those with a deep need to pad their chow hall meals.

Ramen can be used to pay for clothing and hygiene products, or services like laundry, bunk cleaning, dictation, or custom illustration. Gamblers can use it in lieu of chips.

Ramen’s status as the preferred form of exchange also speaks to a sharp decline in the quantity and quality of food in American penal institutions.

Called upon to model a demonstrably tough on crime stance and cut back on expenditures, the institutions are unofficially shunting many of their traditional costs onto the prisoners themselves.

In response, those on the inside have pivoted to edible currency:

What we are seeing is a collective response — across inmate populations and security levels, across prison cliques and racial groups, and even across states — to changes and cutbacks in prison food services…The form of money is not something that changes often or easily, even in the prison underground economy; it takes a major issue or shock to initiate such a change. The use of cigarettes as money in U.S. prisons happened in American Civil War military prisons and likely far earlier. The fact that this practice has suddenly changed has potentially serious implications.

Ramen may be a relatively new development in the prison landscape, but culinary experimentation behind bars is not. From Pruno prison wine to Martha Stewart’s prison grounds crabapple jelly, it’s a nothing ventured, nothing gained type of deal. Work with what you’ve got.

Gustavo “Goose” Alvarez, who appears in Vox’s video, collected a number of the most adventurous recipes in his book, Prison Ramen: Recipes and Stories from Behind Bars. Anyone can bring some variety on the spur of the moment by sprinkling some of your ramen’s seasoning packet into your drinking water, but amassing the ingredients for an ambitious dish like Orange Porkies — chili ramen plus white rice plus ½ bag of pork skins plus orange-flavored punch — takes patience and perseverance. 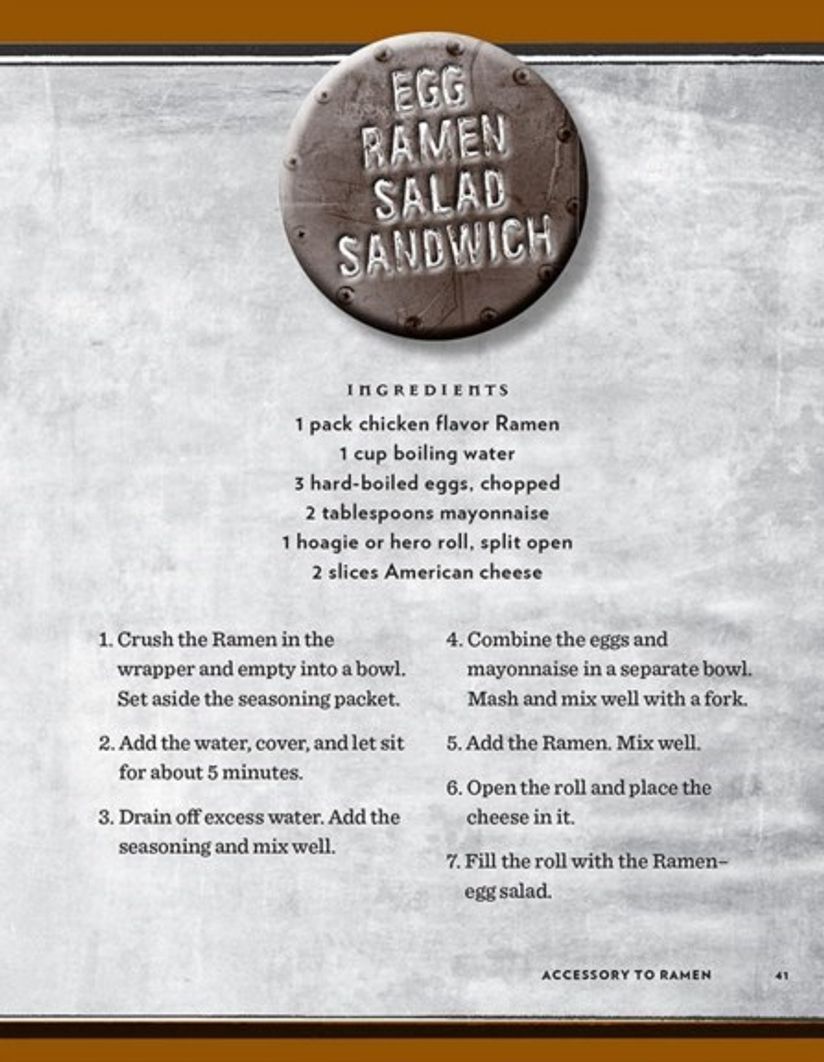 Someone serving a longer sentence has a more compelling reason to search for the ramen-centered sense of harmony and wellbeing on display in Tampopo, the first “ramen western”:

Appreciate its gestalt. Savor the aromas.

Joe Guerrero, host of YouTube’s AfterPrisonShow, is not immune to the pleasures of some of his ramen-based concoctions, below, despite being on the outside for several years now.

You’re free to wrinkle your nose at the thought of snacking on a crumbled brick of uncooked ramen, but Guerrero points out that someone serving a long sentence craves variety in any form they can get. Experiencing it can tap into the same sense of pride as self-governance.

Guerrero’s recipes require a microwave (and a block of ramen).

Even if you’re not particularly keen on eating the finished product, there’s a science project appeal to his Ramen Noodle Cookie. It calls for no additional  ingredients, just ten minutes cooking time, an outrageous prospect in a communal setting with only one microwave.