Marie Curie’s Ph.D. Thesis on Radioactivity–Which Made Her the First Woman in France to Receive a Doctoral Degree in Physics 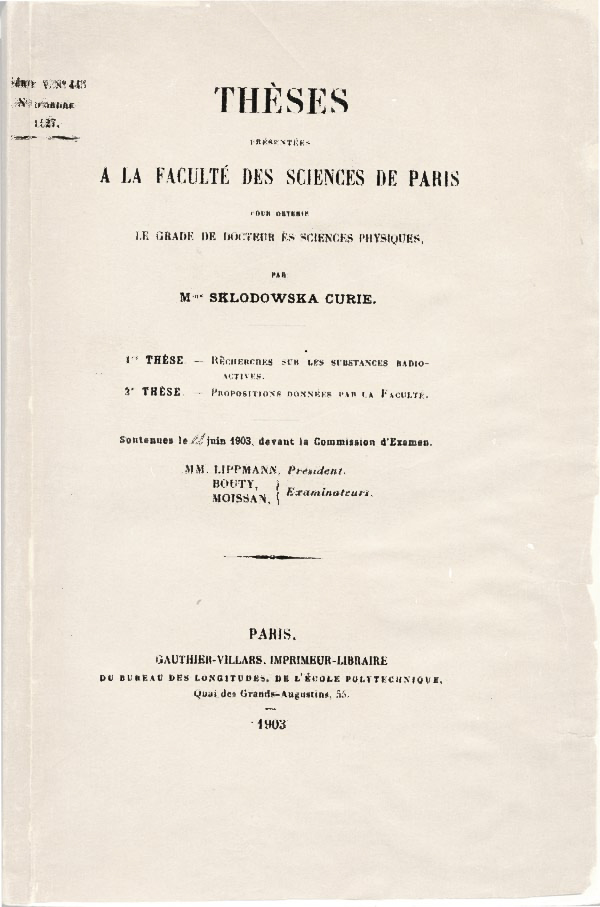 For her groundbreaking research on radioactivity, Marie Curie won the Nobel Prize. Or rather, she won two, one for physics and another for chemistry, making her the only Nobel Laureate in more than one science. What’s more, her first Nobel came in 1903, the very same year she completed her PhD thesis at the Sorbonne. In Recherches sur les substances radioactives (or Research on Radioactive Substances), Curie “talks about the discovery of the new elements radium and polonium, and also describes how she gained one of the first understandings of the new physical phenomenon of radioactivity.”

So says science Youtuber Toby Hendy in the introduction below to Curie’s thesis–a thesis that made her the first woman in France to receive a doctoral degree in physics. “Following on from the discovery of X-rays by Wilhelm Roentgen in 1895 and Henri Becquerel’s discovery that uranium salts emitted similar penetration properties,” says The Document Centre, Curie “investigated uranium rays as a starting point, but in the process discovered that the air around uranium rays is made to conduct electricity.”

Her deduction that “the process was caused by properties of the atoms themselves” — a revolutionary finding that overturned previously held notions in physics — led her eventually to discover radium and polonium, which would get her that second Nobel in 1911.

Unlike her Nobel Prize in physics, which she shared with her husband Pierre and the physicist Henri Becquerel, Marie Curie won her Nobel Prize in chemistry alone. By 1911 Pierre had been dead for half a decade, but Marie’s scientific genius couldn’t be stopped from continuing their pioneering research as far as she could take it in her own lifetime. She clearly knew how vast a field her work, with and without her husband, had opened up: “Our researches upon the new radio-active bodies have given rise to a scientific movement,” she writes at the end of Recherches sur les substances radioactives. That movement continues to make discoveries more than a century later — and her original thesis itself remains radioactive.