I’m sure you’ve heard by now: wealthy, successful film director Spike Lee hopes to fund his next film via a Kickstarter campaign. Yes, that’s right, he wants you to pay for his art. His campaign, perhaps needless to say, is hardly popular with the average film fan, many of whom find it hard enough to scrounge up the skyrocketing prices of tickets these days. Lee has responded to his critics, but somehow I doubt his reasoning will go over well.

But we’re not here to talk about alleged crowdfunding abuses (have at it in the comments if you must). Instead, today we have for you—in the tradition of our many posts on famous teachers’ syllabi—one of Lee’s teaching tools in his role as an NYU professor. Where all of our previous posts have featured reading lists, Lee's is a list of films, which he hands out to all of the students who take his graduate class--not required viewing, but recommended as "essential" for every aspiring director. 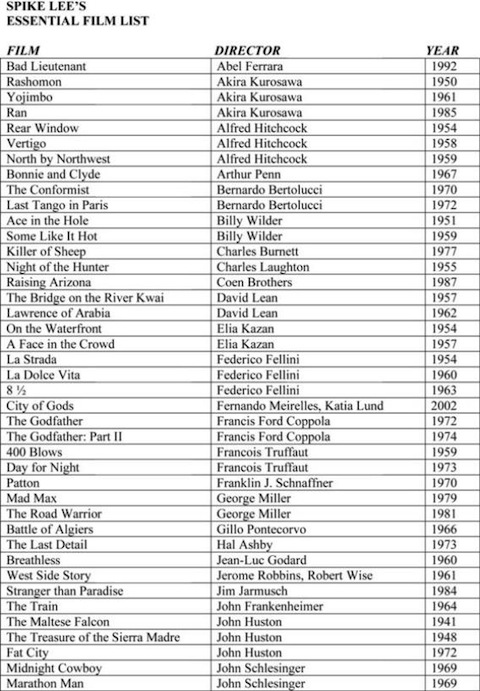 In the video at the top of the post, see Lee introduce the list of what he considers, “the greatest films ever made." "If you want to be a filmmaker," he says, "you should see these films." The list, above and continued below, includes some of the usual critical favorites—Rashomon, Vertigo, On the Waterfront—and some pretty left field choices, like Mel Gibson’s Apocalypto.

Slate, which first published the list, notes the omission of usually revered directors like Howard Hawks, John Ford, Fritz Lang, and Yasujirō Ozu as well as the paucity—or near non-existence—of female directors (only one makes the list, the co-director of City of God). In addition to possibly ranting about, or defending, Lee’s use of Kickstarter, many of you may find yourselves quibbling over, or defending, his definition of “essential." And so, I say again, have at it, readers!

Note: When Spike originally released this list, many noted the lack of female filmmakers. Lee accepted that critique and released an updated list. Find it here. 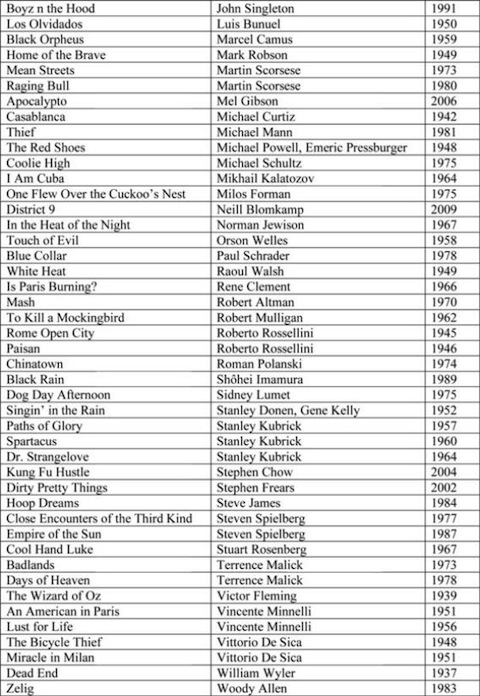