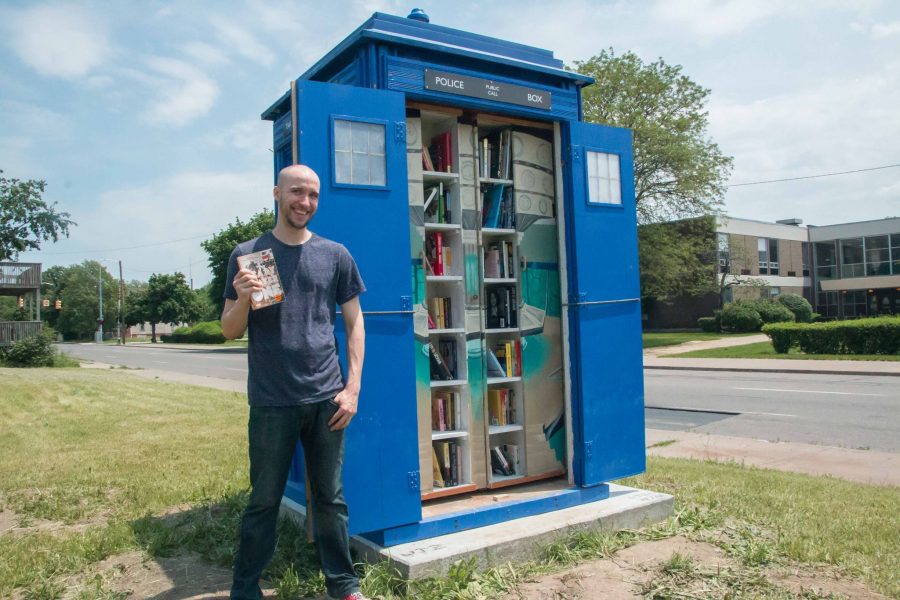 If you live in a major American city — and maybe even if you live in a major non-American one — you may well have come across a Little Free Library, those boxes of books open to the public for whomever would like to take one or leave one. Most Little Free Libraries, often put up on private property by the residents of that property, tend to look like oversized birdhouses, but none of the program’s rules requires them to look that way. A Tokyo subway station, for instance, built one to resemble a subway car. Other industrious Little Free Library members have used the opportunity to pay tribute to their obsessions, and few obsessions run as deep (deeper, even, than the obsession for trains in Japan) as the one for Doctor Who.

The English genre-bending speculative-fiction show has, since its debut on the BBC back in 1963, followed the titular Doctor (just “the Doctor,” not “Doctor Who,” and certainly never “Dr. Who”) through many dramatic changes of settings, and even more notably changes of actors, as he falls into adventures with the various Earthlings he encounters. Always on the move, the Doctor gets around by means of a machine called a TARDIS, which stands for “Time And Relative Dimension In Space.” Theoretically able to change its shape depending on the period of time it lands in, the TARDIS — in a neat demonstration of the creativity that arises from constraints, in this case a severely limited production budget — gets permanently stuck in the shape of a London police call box, thus repurposing one of the best-known icons of English cities into one of the best-known icons of English television.

The best-known TARDIS-shaped Little Free Library, which appears at the top of this post, entered service in a vacant lot in Detroit, a place by now well used to making urban improvements by hand. The father and son behind it “began work last Labor Day, and were aided by an online building community called Tardis Builders,” writes The Verge’s Andrew Liptak.

“The final structure stands almost 10 feet tall, weighs almost a ton, and its front shelves holds around 140 books.” These videos show off other book-lending TARDISes in North America, from Bloomington, Indiana to Macon, Georgia to Saskatoon, Saskatchewan — all standing evidence of how far Doctor Who‘s appeal has spread beyond its native culture.

As much as it may seem like nothing more than the proudly nerdy pursuit of worshipful fans, building a Little Free Library (or in most of these cases, a not-so-Little Free Library) in the form of a TARDIS has a certain conceptual validity in and of itself. As every Doctor Who viewer knows, the TARDIS, not just a device enabling travel to any point in time-space, accomplishes another kind of spatial feat by having an interior much larger than its the exterior. “We thought it would be cool to fill the TARDIS with items that are large on the inside, like books that hold whole literary worlds,” says Dan Zemke, co-builder of the one in Detroit, in a Parade article. Borges, as well as all the other most brilliant speculative minds before Doctor Who and after it, would no doubt approve.