Apollo 11 in Real Time: A New Web Site Lets You Take a Real-Time Journey Through First Landing on the Moon 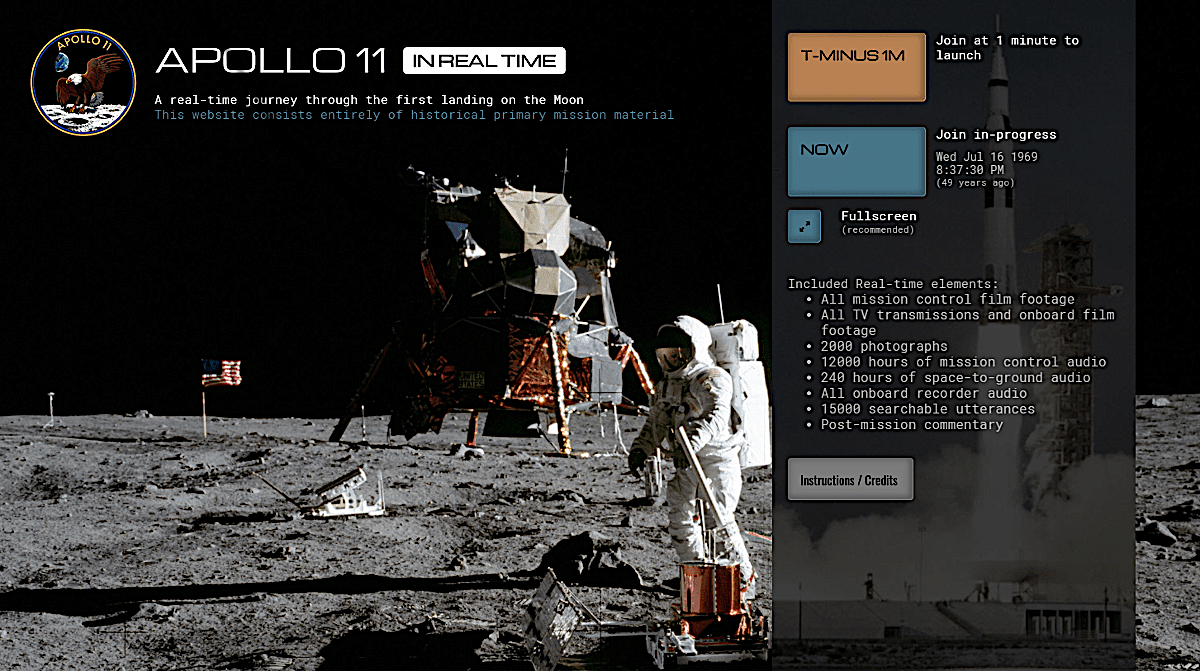 It only took four days. Four, long, nail-biting days where anything could go wrong, with so many fraught steps, between the liftoff of Apollo 11 and Neil Armstrong leaving the first footprint on the moon. And now fifty years stretches between us and those days, very brief days indeed, where the population of the earth came together over one stunning act of science and ingenuity. Yes, it was an American flag planted on the moon, but it was one giant leap for mankind.

This July we might want to revisit those warm feelings about humanity in what feels like a diminished world, and look in wonder at the stars again. The Apollo In Real Time website is here to do just that.

Now you can go to this website, sit back and watch as the entire Apollo 11 mission unfolds in real time.

It’s a beautifully designed website, looking like a control panel from NASA itself. There are three timelines up top to show exactly where we are over the entire course of the nine days, from launch to re-entry. On the left there is a summary of Mission Status, including velocity and distance from the earth. Below is a real time transcript between mission control and the craft. And a strip down the middle offers over 40 different channels of audio from all the main and not-so-main players, a total of 11,000 hours, most of which has never been heard before. Where available there’s film and video footage, along with photographs, a lot of it taken by the astronauts themselves, and all in the best possible quality. So if you think you’ve seen this footage over and over, think again.

(Side note: I find just listening to the sounds of mission control is very relaxing. I'm thinking a lot of you will agree.)

The site is the creation of Ben Feist, a software engineer and historian at NASA, along with his team of collaborators, who undertook something similar a few years ago for Apollo 17.