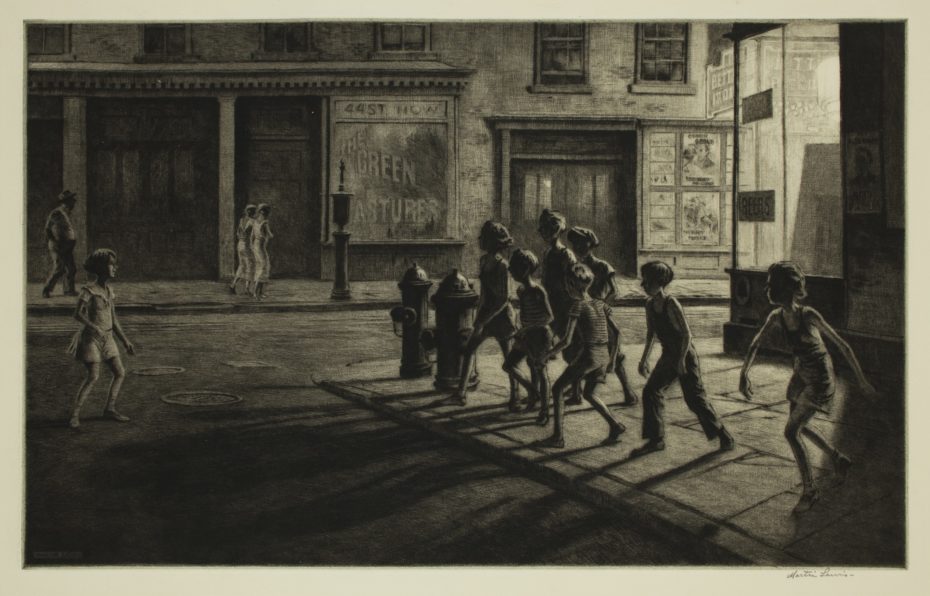 Every good teacher must be prepared for the students who surpass them. Such was the case with Martin Lewis, Edward Hopper's onetime teacher, an Australian-born printmaker who left rural Victoria at age 15 and traveled the world before settling in New York City in 1900 to make his fame and fortune. By the 1910s, Lewis had become a commercially successful illustrator, well-known for his etching skill. It was then that he took on Hopper as an apprentice.

“Hopper asked that he might study alongside him,” writes DC Pae at Review 31, “and Lewis thereafter became his mentor in the discipline.” The future painter of Nighthawks even “cited his apprenticeship with the printmaker as inspiration for his later painting, the consolidation of his individual style.” Messy Nessy quotes Hopper’s own words: “after I took up my etching, my painting seemed to crystallize.” Hopper, she writes, “learned the finer points of etching and both artists used the great American metropolis at night as their muse.” 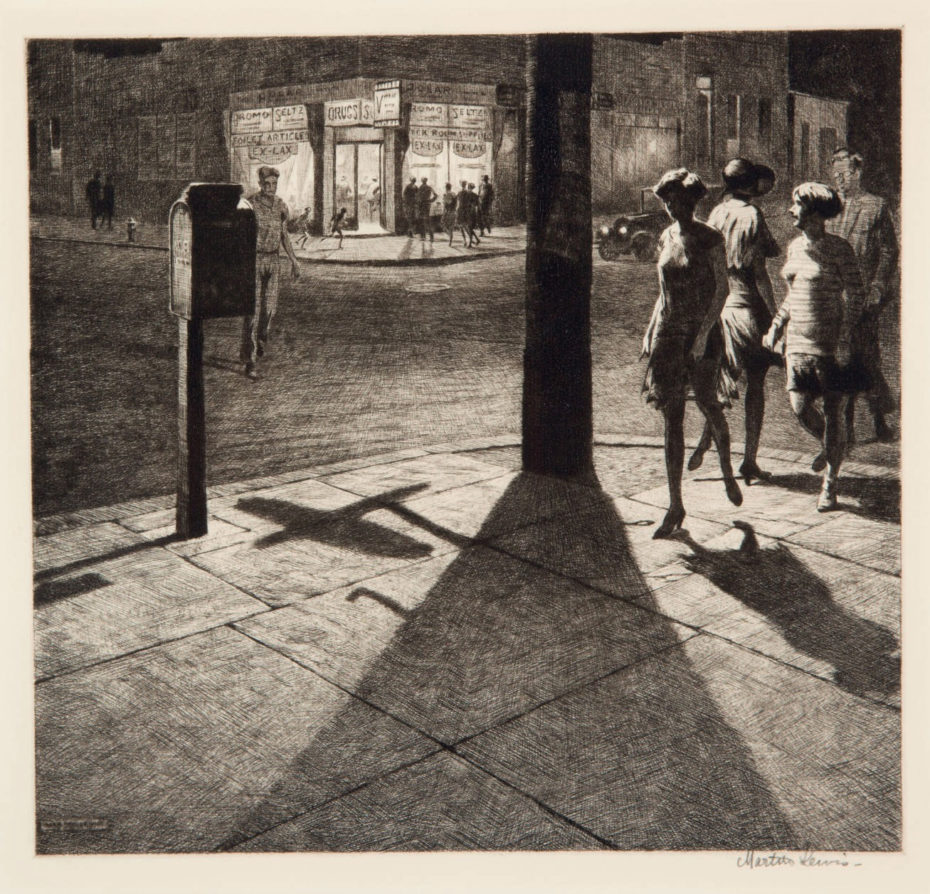 Though he is not popularly known for the art, Hopper himself became an accomplished printmaker, creating a series of around 70 works in the 1920s that drew from both Edgar Degas and his etching teacher, Lewis.

“Hopper easily took to etching and drypoint,” writes the Seattle Artist League. “He had a preference for a deeply etched plate, and very black ink on very white paper, so the prints were high contrast, similar to Martin Lewis…, Hopper’s primary influence in printmaking.” 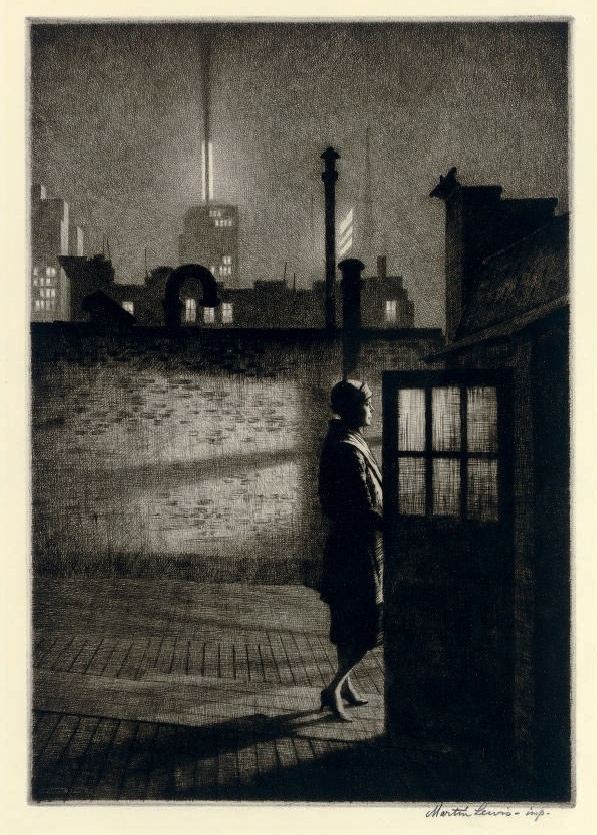 A similar series by Lewis in the 1920s, which includes the striking prints you see here, shows a far stronger hand in the art, though also, perhaps, some mutual influence between the two friends, who exhibited together during the period. But there’s no doubt Lewis’s long shadows, forlorn street-lit corners, and cinematic scenes left their mark on Hopper’s famous later paintings. 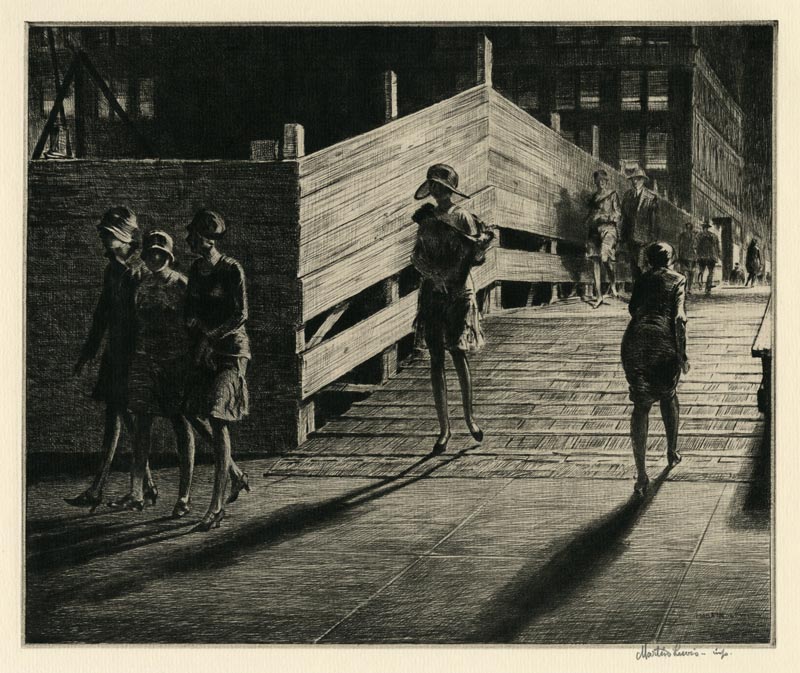 It was to painting, after the massive popularity of printmaking, that the art world turned when the Depression hit. Lewis found himself out of date. Hopper left off etching in 1928 to focus on his primary medium. In many ways, Pae points out, Lewis served as a bridge between the documentary Ashcan School and the more psychological realism of Hopper and his contemporaries. Yet he “died in obscurity in 1962, largely forgotten” notes Messy Nessy (see much more of Lewis’s work there). “History chose Edward Hopper but Martin Lewis was his mentor,” and a figure well worth celebrating on his own for his technical mastery and originality. 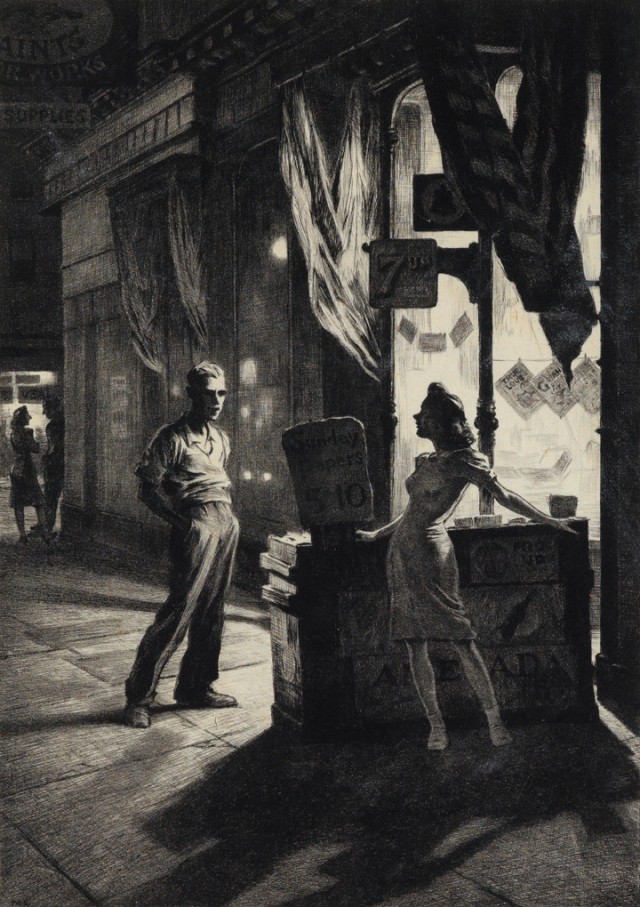 10 Paintings by Edward Hopper, the Most Cinematic American Painter of All, Turned into Animated GIFs