Why Every Nominated Film Will Win the 2020 Oscar: A Pretty Much Pop Podcast Debate (ep. 30) 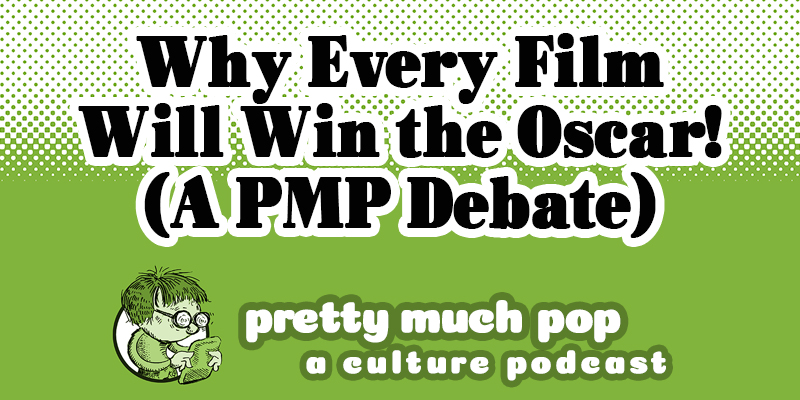 The 2020 Academy Awards are nearly upon us! Realistically, most of you will find this episode well after the winners have already been announced, but seriously, that should not affect your enjoyment of this discussion. Your intrepid non-film-critic Pretty Much Pop: A Culture Podcast hosts have each been randomly assigned three of the best picture nominees to argue for either for why it should with the Oscar, or if we really don't like it, why we think it will win anyway. The assignments were as follows:

As we hash out the relative merits of these films, we reflect on what it is to be an Oscar-winning type-of-film as opposed to one people might actually enjoy watching, patterns of what kinds of films win in which categories, and the effect of viewing conditions, prior knowledge, and preconceptions on our enjoyment.

In preparation, we all watched all nine films and looked at some of the positive and negative reviews about them. Here are a few more articles covering the Oscars more generally that we also used to make ourselves more susceptible to OSCAR FEVER.

The particular negative 1917 review Mark talks about was by Richard Brody. Here's an article about Joaquin Phoenix improvising his stunt work as Erica mentions. Speaking of Joker, have you heard the (sub)Text podcast presentation by Mark's Partially Examined Life co-host Wes Alwan on the psychoanalytic dimensions of that film?

This episode includes bonus discussion musing about past winners and 2020 acting categories that you can only hear by supporting the podcast at patreon.com/prettymuchpop. This podcast is part of the Partially Examined Life podcast network.