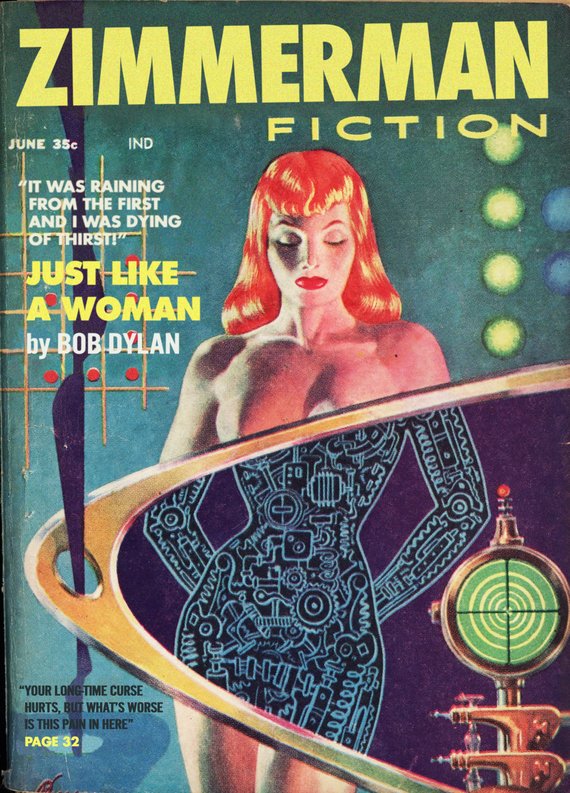 Screenwriter Todd Alcott has been very busy since we introduced you to his hilarious Mid-Century Pulp Fiction Cover project last month.

To restate what should be obvious from the second, if not first glance, none of Alcott’s titles are real. His aesthetically convincing mock-ups pay tribute to favorite songs by favorite artists: David Bowie, Talking Heads, Joy Division, Elvis Costello…

The start of the school year finds him in a Dylan mood, rendering some of his best known hits in a variety of pulp genre formats:

Bob Dylan is the perfect subject for this project, because his work has always been all about quotation and repurposing. From the very beginning, he took old songs, changed the lyrics and called them his own…. And it's not just the melodies, he's also not shy about lifting phrases and whole lines from other sources. One of the fun things about being a Bob Dylan fan is being able to spot the influences. It's not just lifting lines from classic blues songs, where we don't really know who "wrote" the originals, it's real, identifiable, copyright-protected material. And you never know where it's going to come from, a book about the Yakuza from Japan, a cookbook, an old Time Magazine article, or 1940s noir pictures.

And I was like "Wait, what?" Because that's a line from a really obscure Dylan song, "Maybe Someday," off his album Knocked-Out Loaded.

I was like "Wait, why did that line stick in Dylan's mind? Why did he decide to quote that? Is it just the way Mitchum says it? What happened there?" And suddenly a song I hadn't thought about much became a lot more interesting.

So for my Dylan covers, I try to carry on that tradition of taking quotes and repurposing them. So "Just Like a Woman" becomes a story in a science-fiction pulp, and "Like a Rolling Stone" becomes an expose on juvenile delinquency, and "Rainy Day Women" becomes a post-apocalyptic adventure story.

In a way, it's what this project is all about, taking discarded pieces of culture and sticking them back together with new references to make them breathe again.

I think it’s fair to say that Alcott’s buxom flame-haired cyborg leans in to that criticism. The cover of this faux science fiction mag also harkens back to a time when the depiction of sexy female robots left something to the imagination.

From a design standpoint, it’s a great illustration of the heavy lifting a single well-chosen punctuation change can do.

The magazine’s title is an extra gift to Dylan fans. 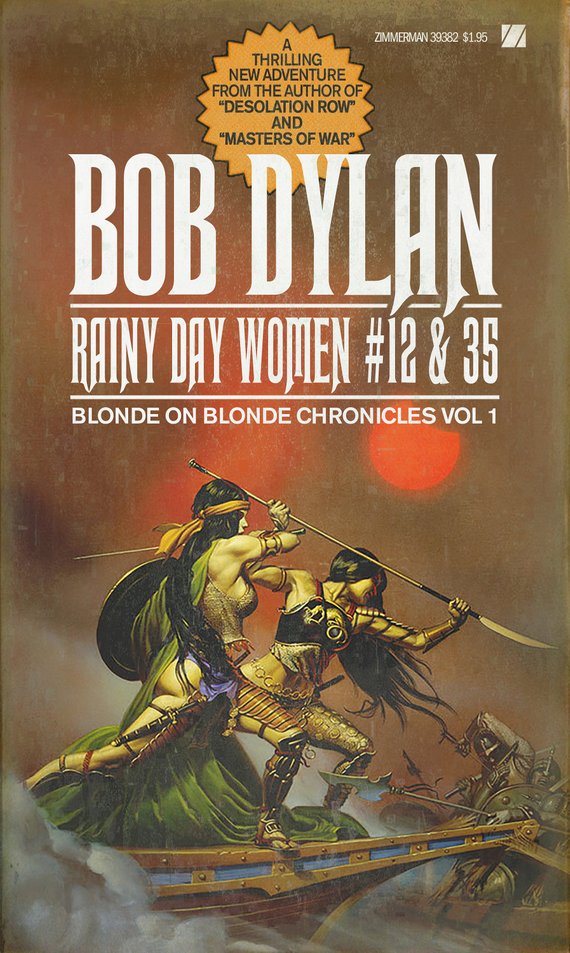 The Blonde-on-Blonde Chronicles continue with Rainy Day Women #12 & 35. Does it matter that the breast-plated, and for all practical purposes bottomless warriors are raven tressed?

Only if tongue's not firmly in cheek. 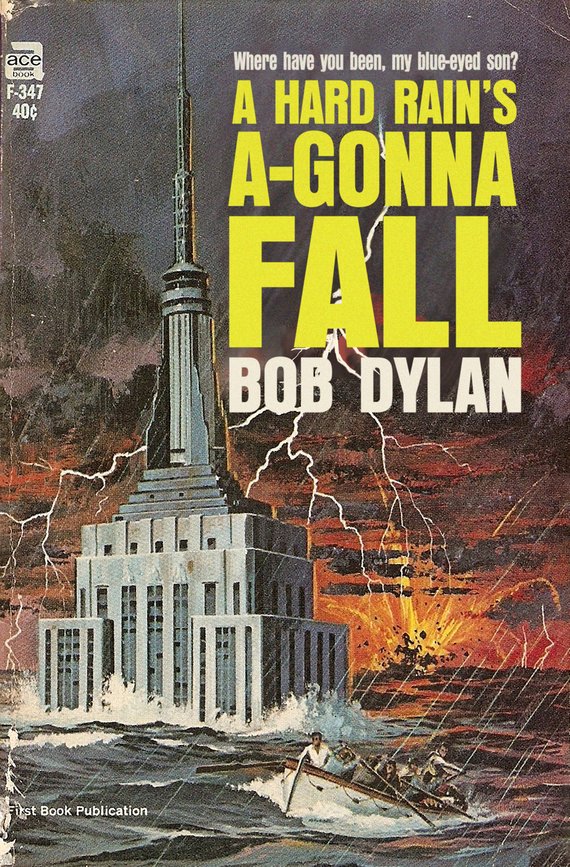 The nightmare vision of Dylan’s seven-minute protest song "A Hard Rain's A-Gonna Fall” makes for a smooth transition to a disaster novel of the 1970s.

In a 1963 radio interview with author Studs Terkel, Dylan asserted that the song wasn’t directly related to the nuclear fears all-pervasive at the time:

It’s not the fallout rain. It isn’t that at all. The hard rain’s gonna fall is in the last verse...That means all the lies, you know, that people get told on their radios and in newspapers. All you have to think for a minute, you know. Trying to take people’s brains away, you know. Which maybe has been done already. I hate to think it’s been done. All the lies, which I consider poison.

This writer can think of another reason citizens might find themselves fighting for their lives in a rowboat level with the very tippy top of the Empire State Building. So, I suspect, can Alcott.

Or maybe we’re wrong and climate change is nothing but fake news. 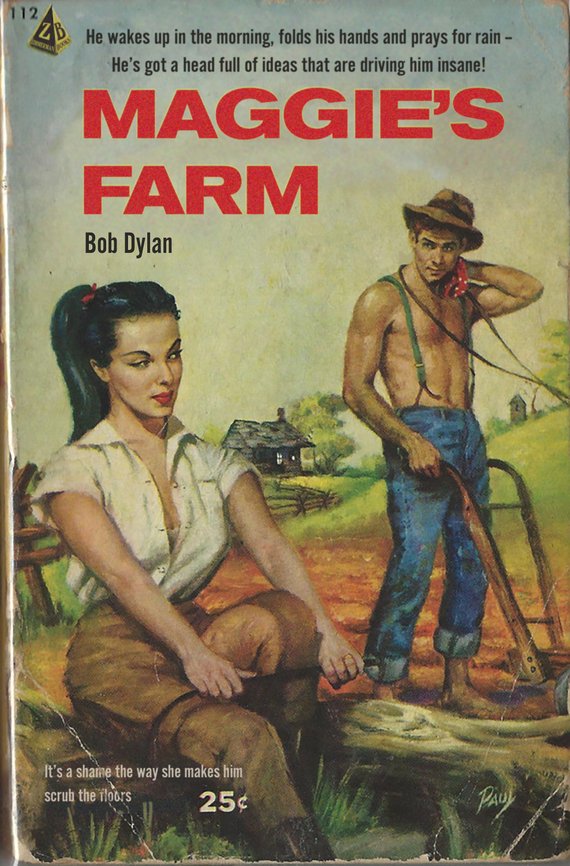 Alcott gets some mileage out of another rain-based lyric on Maggie’s Farm, a steamy rural romp whose creased cover is also part and parcel of the genre. 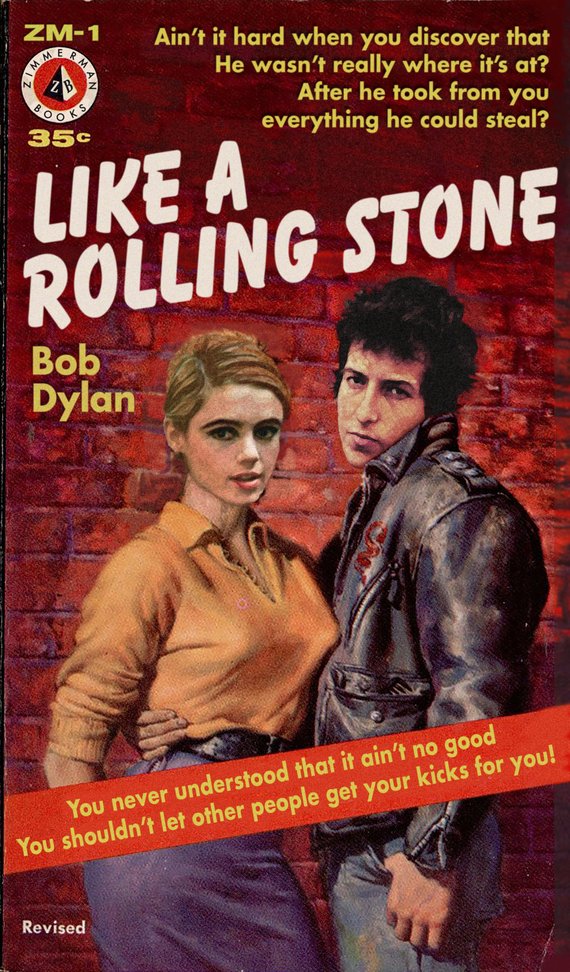 Who’s that young punk on the cover of Like a Rolling Stone? Beats me, but the girl’s a dead ringer for Warhol superstar, Edie Sedgwick, the purported inspiration for the song that shares the novel’s name. Ms. Sedgwick’s real life figure was much less voluptuous, but if the genre covers that sparked this project demonstrate anything, it’s that sex sells. 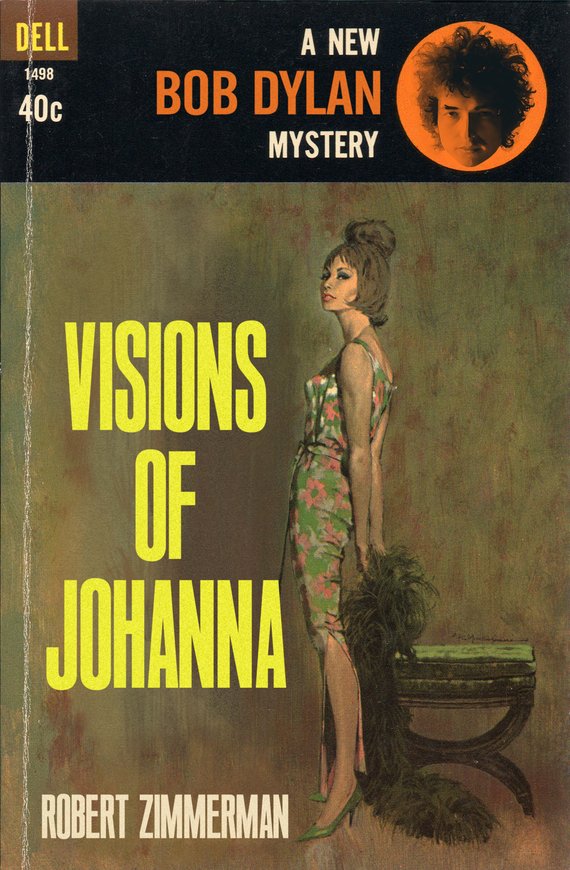 Visions of Johanna is positively understated in comparison. While many pulp authors toiled in obscurity, let us pretend that Nobel Prize winner and (faux) pulp-novelist Dylan wouldn’t have. Especially if he had a series like the pseudonymous Brett Halliday’s popular Mike Shayne mysteries. At that level, the cover wouldn’t really need quotes.

Though what harm would there be? There’s plenty of negative space here. Readers, which line would you splash across the cover if you were this prankster, Alcott?

Ain’t it just like the night to play tricks when you’re tryin' to be so quiet?

We sit here stranded, though we’re all doin’ our best to deny it

And Louise holds a handful of rain, temptin’ you to defy it

Lights flicker from the opposite loft

In this room the heat pipes just cough

But there’s nothing, really nothing to turn off

Just Louise and her lover so entwined

And these visions of Johanna that conquer my mind

We can hear the night watchman click his flashlight

But she just makes it all too concise and too clear

That Johanna’s not here

The ghost of ’lectricity howls in the bones of her face

Where these visions of Johanna have now taken my place

Now, little boy lost, he takes himself so seriously

He brags of his misery, he likes to live dangerously

And when bringing her name up

He speaks of a farewell kiss to me

How can I explain?

And these visions of Johanna, they kept me up past the dawn

Inside the museums, Infinity goes up on trial

But Mona Lisa musta had the highway blues

You can tell by the way she smiles

When the jelly-faced women all sneeze

Hear the one with the mustache say, “Jeeze

I can’t find my knees”

Oh, jewels and binoculars hang from the head of the mule

But these visions of Johanna, they make it all seem so cruel

Sayin’, “Name me someone that’s not a parasite and I’ll go out and say a prayer for him”

As she, herself, prepares for him

And Madonna, she still has not showed

Where her cape of the stage once had flowed

The fiddler, he now steps to the road

He writes ev’rything’s been returned which was owed

On the back of the fish truck that loads

While my conscience explodes

The harmonicas play the skeleton keys and the rain

And these visions of Johanna are now all that remain

You can see more of Todd Alcott’s Mid-Century Pulp Fiction Cover project, and pick up archival quality prints from his Etsy shop.

Bob Dylan Potato Chips, Anyone?: What They’re Snacking on in China

Bob Dylan Hates Me: An Animation

Ayun Halliday - no relation to Brett - is an author, illustrator, theater maker and Chief Primatologist of the East Village Inky zine.  Join her in NYC on Monday, September 24 for another monthly installment of her book-based variety show, Necromancers of the Public Domain. Follow her @AyunHalliday.