The multinational toy manufacturer Mattel is encouraging youngsters to play doctor — not a euphemism — and honoring first responders with the recent release of three healthcare-themed “Career Barbies.”

The company is putting its money where its mouth is by donating $5 to the First Responders Children’s Foundation for every doctor, paramedic, or nurse Barbie purchased at Target through August 28.

Mattel has also identified six female healthcare pioneers whose efforts during the pandemic merit a one-of-a-kind Barbie who shares their likeness.

Vaccinologist Sarah Gilbert, who led the team that developed the Oxford/AstraZeneca vaccine, describes this unexpected honor as “a very strange concept” (presumably as compared to being awarded a damehood or receiving a standing ovation at Wimbledon.) 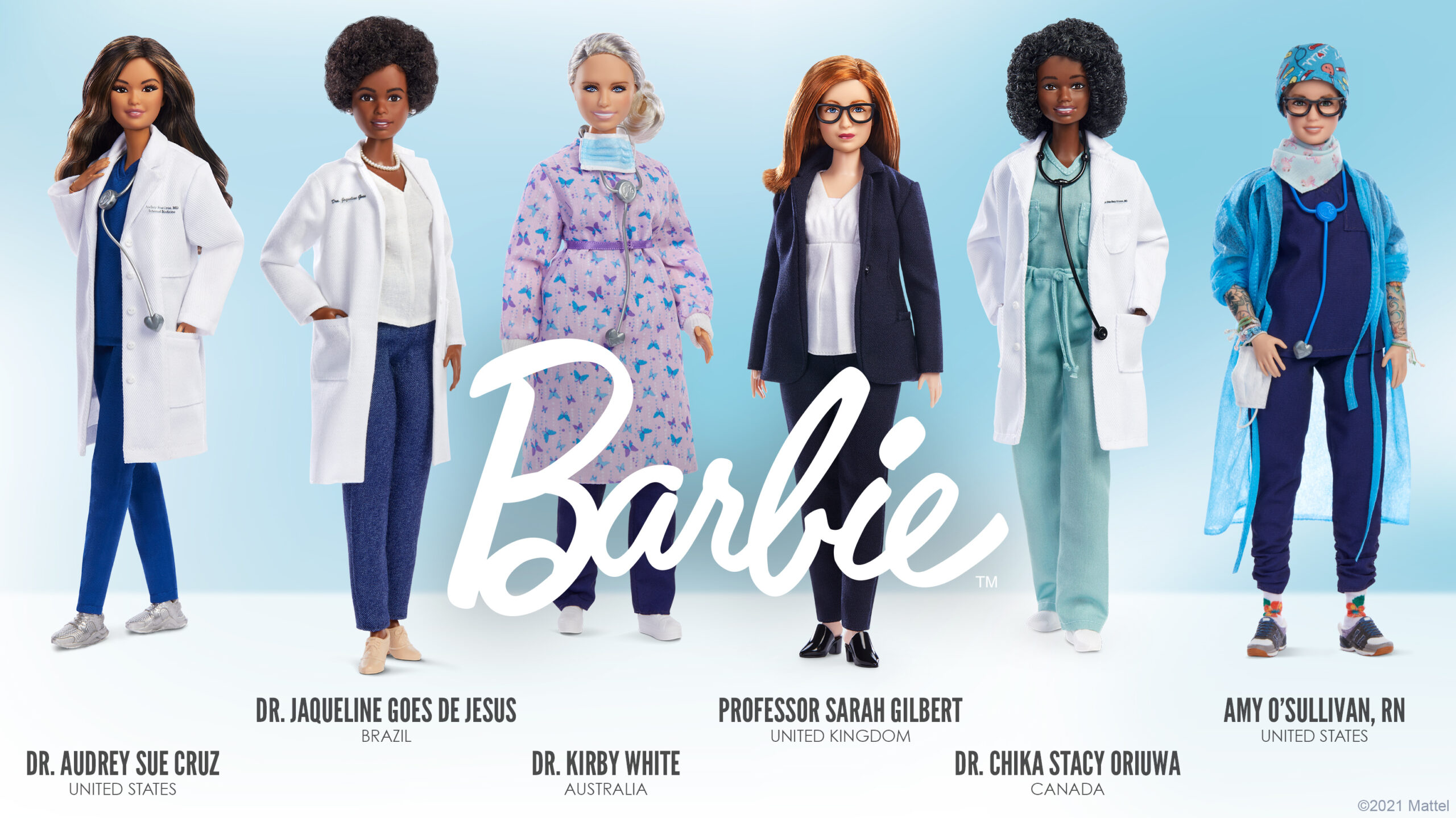 The 59-year-old Oxford University professor added that she hoped the characteristically smooth plastic doll would be “part of making it more normal for girls to think about careers in science, although, to be honest, when I was a young girl I never believed that I wouldn’t have a career in science.”

If the doll falls short of inspiring girls to consider a career in STEM, Women in Science & Engineering (WISE), the nonprofit organization Professor Gilbert chose to receive a donation from Mattel on her behalf, can take up the slack.

One of the most compelling of the six custom-made Front Line Responder Barbies is based on veteran nurse Amy O’Sullivan, a heavily tattooed, queer mother of three, who cared for the first COVID-19 patient (soon to become New York City’s first official COVID death) in Brooklyn’s Wycoff Hospital.

Soon thereafter, she survived being put on a ventilator with COVID herself, eventually winding up on the cover of Time Magazine, in the same neckerchief, floral socks, eye catching surgical cap and woven bracelets her tiny scrub-suited doppelganger wears.

Surely Amy O’Sullivan is a better all around role model than the similarly inked Tokidoki Barbie or Totally Tattoo Barbie, or for that matter, the non-custom made First Responder Nurse, whose description on Target’s website seems a bit retrograde, given the events of the last year and a half:

The real life O’Sullivan, who was very involved in the creation of her custom doll, seems tickled by Mattel’s faithful recreation, telling The New York Post:

When I was younger I always felt like an outsider — nobody ever looked like me, talked like me, walked like me. I had no role model at all when I was growing up. So if I can be some little girl’s role model that feels like this, I would love that.

Nurse O’Sullivan had stronger words for those who have aged out of the demographic, in a recent interview with Time:

I see these young people not wearing masks. And, you know, those are the people that COVID is affecting now, the younger generation. They’re becoming very sick. And it’s never going to go away until we get vaccinated and wear masks.

That might be a bit heavy for those on the younger end of Career Barbie’s recommended 3 and up age group (“especially those interested in caretaking and helping others!”), but hopefully her words will carry some weight with those responsible for protecting those children.

The other custom-made Barbies honor:

Dr. Audrey Cruz, who collaborated with other Asian-American physicians to battle anti-Asian-related bias springing from the pandemic

University of Toronto psychiatry resident, Chika Stacy Oriuwa, whose activism includes creating initiatives to boost the number of Black students applying to medical school and create networks of support for scholarly and professional advancement within the Black community.

Biomedical researcher Dr Jaqueline Goes de Jesus whose team sequenced the SARS-CoV-2 genome within 48 hours of receiving samples from the first infected Brazilian patient, differentiating the variant from the one that caused infections earlier in the pandemic.